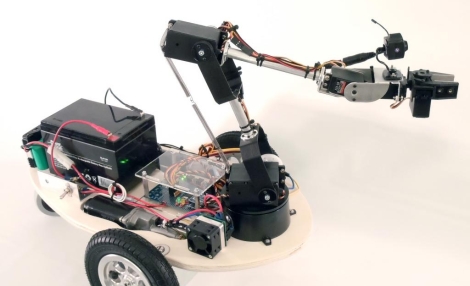 Vanmunch, or Dave, from Parallax Forums got sick of having to actually go out to the yard to do yard work. So, of course, he built a remoted controlled robot with a 5-axis arm, dubbed Nuntius the Garden Avenger, so that he could turn his yard-work into couch-work. The robot’s arm is controlled by a smaller, scale arm on the controller. When a user physically manipulates the model arm, the robot does the same. It’s even outfitted with a wireless camera so that you really don’t have to leave your couch to go pull weeds. The downside is that it’s not really pulling the weeds for you since you have to control it, so you aren’t actually saving any time. Being on a couch is always nice, though I’m not quite sure it’s nice enough to justify this kind of time and effort. Then again, my couch isn’t that great.

(Parallax Forums via Hack a Day)