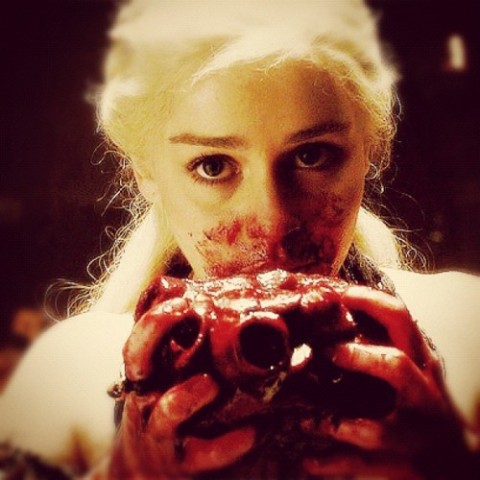 Theater nerds will take what is theirs with fire and blood, pending approval from the PTA of course: for the second year in a row, Parkview Middle School in Jefferson, Indiana is going to spill a lot of red food coloring in the name of art.

Tonight marks the opening performance of Game of Tiaras, a dark comedy that mocks various Disney stories and Game of Thrones to, in the words of the local News and Tribune, give the audience “the same joy they felt watching Prince Joffrey’s untimely demise.”

The thing about this play is that it’s not traditional […] We need to make fun of ourselves. They’re middle-schoolers, they’re kind of over Disney. This is kind of their farewell to that.

Personally I think Frozen is about so much more than tiaras (the impact of meteorological phenomena on import/export relations, for example), and I don’t see the harm in loving Disney movies long into adulthood, provided you can watch them them through a critical lens. That being said, it’s awesome that Zell respects her students enough to trust them with material that draws from some dark influences.

Game of Tiaras actually sounds less violent than previous Parkview productions—after a twenty year hiatus, the theater program was resurrected last year with a performance of Ten Ways To Survive A Zombie Apocalypse. Says Zell, “Not everyone’s an athlete, so these babies need something to do. Our kids are kind of edgy, so we want to do edgy shows.”

If you want to see the edgy kids of Indiana act their hearts out tonight in Game of Tiaras‘ debut, performances will be at 7 p.m. today and Friday, Nov. 6-7 at the school. News and Tribune notes that “VIP tickets include special seating, as well as drinks and a snack during intermission.”

Eat your heart out, Broadway!

(via News and Tribune)