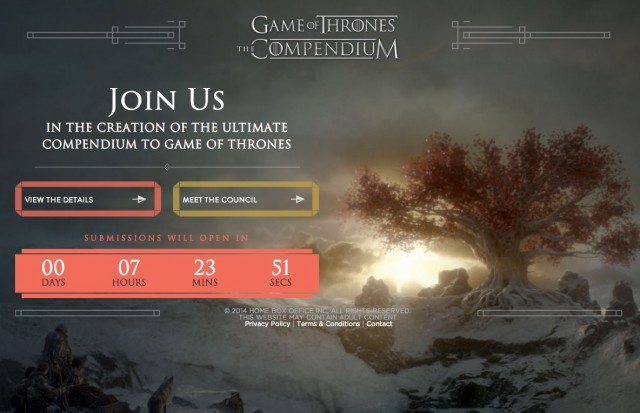 [Update] An HBO representative contacted The Mary Sue by email to let us know that the Compendium is not an attempt to profit off of fan works. They told us, “We have not stated that the compendium will be for sale. It will be provided to those whose works have been selected to be included. HBO will not be exploring any opportunities to profit off the submitted works. The goal is only to showcase the creativity of Game of Thrones fans. To ease any concerns that may arise, we have altered the legal language to make this clear.”

[Original story] When Game of Thrones: The Compendium was announced, the crowd-sourced Game of Thrones book had some rather dubious rights agreements. They’ve since been improved, but there are things you should know before handing over your own hard work for whatever HBO feels like doing with it now and forever.

HBO’s site for The Compendium says it’s meant to showcase a wide variety of fan-made materials including “anything from story analysis, arts and crafts, original artwork, costume or jewelry design, music—anything that extends the Game of Thrones experience.” So, basically what the Internet already does already all the time. On one hand, allowing fans to participate in The Compendium is a great idea and an admission that a lot of the time, it’s the fans who are the experts who are worth hearing from.

On the other hand, HBO is going to sell this book. For money. Probably lots of money. And they’re going to share all of that money with—hahaha nope! I’m sorry. I really tried to get all the way through that sentence without breaking. No, there will be no monetary compensation for contributors, because why pay people for something they already do for free just because they’re allowing you to make money off of it? All they get is a free copy of The Compendium. If only books and “exposure” were edible or accepted as rent. Winter is coming, and it’s cold out there. (Sorry. Couldn’t help myself.)

But it doesn’t stop there. When HBO first made the announcement, the rights disclaimer gave the company full copyright of all submissions—accepted or not—according to Writer Beware. Since then, they’ve apparently heard the criticism and at least changed their policy so that creators now grant HBO moral rights, which allows the company to use work without having to worry about attribution or alteration but leaves the original creator with copyright.

Still, it’s weird that HBO wants those rights for all submissions instead of just the ones accepted by the “council” of judges. While I’m not generally one to read too much into rights agreements, and I can see where HBO might be concerned that they could face a lawsuit over future products that inadvertently come too close to an unused submission, I also understand people’s uneasiness over the lack of an expiration on those rights.

Basically, HBO is getting a bunch of free content that it has a right to use now or at any point in the future without compensating the creators. Since they’ve at least tried to address concerns, I’m willing to believe that most of these errors in judgment are just accidental oversights in clauses meant to cover HBO’s ass.

For me, it’s the lack of monetary compensation for creators that really leaves a bad taste in my mouth. Submissions open in just a few hours, but fans would be wise to consider whether their hard work is worth more than a free book of their own work—and not even that if your work isn’t accepted, which still allows HBO to use it, mind you—and a pat on the back.

(via Winter Is Coming, image via screenshot)