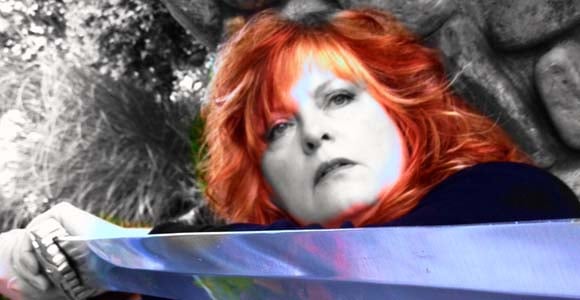 Once again, Gail Simone took to Twitter to hint at a big announcement and once again, her teasers did not disappoint. Simone will be writing a new ongoing Red Sonja comic book for Dynamite Entertainment. Hit the jump for more info plus the fantastic cover from Fiona Staples.

Artist Walter Giovani will join Simone on the title starting in July, according to Comic Book Resources. Covers will be handled not just by Staples but also Nicola Scott, Colleen Doran, Jenny Frisson, and Stephanie Buscema. Yup, that’s right, all women.

“Part of the joy of my career, for me, has been giving these iconic females a bit of shading of that unapologetic female vibe,” she told MTV Geek. “I think it’s an interesting approach. And it’s kind of fun to have a book with so much female firepower still be full of beheadings and sex and monsters.”

And what about that sex appeal?

“Let’s face it, for a period of decades, most female characters in comics were not designed to attract female readers. They were designed to attract male readers. That left us females who loved comics to sort of appropriate these characters for ourselves. And we did,” she told CBR. “But out of that pool, some characters refused to just be pin-ups and sex objects. Some captured the imaginations of young girls, and they survived when the others fell into disinterest and disuse. For me, there’s something incredibly appealing of a weary, terrifying Red Sonja under a blood red sun, holding a bloody sword over the bodies of her enemies. That isn’t about bikinis, and it’s the soul of the character.” 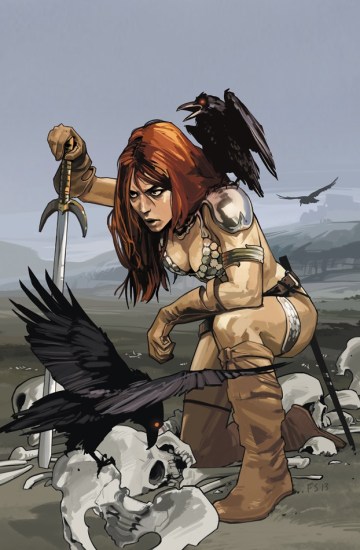 Though the bikini can’t be missed. Even if you don’t know much about the character of Red Sonja, you probably know what she wears. CBR asked Simone how she feels about writing a character who fights in a bikini.

“About the T&A thing, you know, people said that same thing about Black Canary when it was announced I would be taking over ‘Birds of Prey.’ Red Sonja’s got a metal swimsuit, sure, but she wears more clothes than Conan,” she said. “She’s a stunning image just standing still, I love that — but if you look up ‘ferocity’ in the dictionary, there’s a picture of Sonja (well, there should be). In a sea of testosterone-laden barbarian comics, Sonja was more kickass than any of them, to me. I just dearly love her.”

However, she did mention Red Sonja would be getting different outfits.

Red Sonja has origins that begin in the 1930s but Simone said she always tries to make every issue new reader friendly. Speaking with Wired Simone said, “Red Sonja, she was a hellraiser before Buffy, Xena and Ripley even existed. When so many heroines in comics were all hung up on romance and the bizarre gender politics of comics at the time, Sonja was out cutting off the heads of dragons and pirates…This is a clean slate, by the end of the first few pages, you know where Sonja has been, what she’s lived through, and why she has the mission she has.”

Will you be picking up Red Sonja #1?