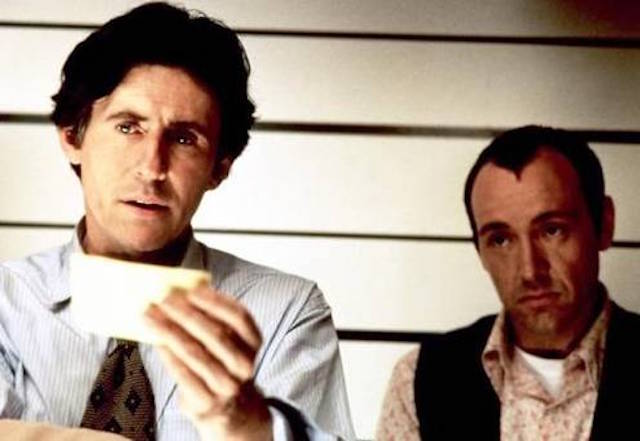 Actor Gabriel Byrne spoke frankly about the “predations” of his Usual Suspects co-star Kevin Spacey, revealing that the production was suspended for several days following allegations of sexually inappropriate behavior by Spacey. The movie was filmed in 1995.

Byrne gave an interview to The Sunday Times while promoting his George Bernard Shaw documentary My Wonderful Self, and he did not hold back in addressing the corruptions of Hollywood and the allegations that Spacey is facing. Byrne, a film and TV veteran who played ringleader Dean Keaton in The Usual Suspects, told the Times that Spacey’s outlandish behavior was so well-known as to be a “joke” even in the ’90s. Then he related how the movie was closed down for a few days while filming, though he did not learn the reason until later:

“I did not know honestly then the extent of his violence,” said Byrne. “I mean, he was kind of a joke in that people would say, ‘That’s Kevin,’ but nobody really understood the depth of his predations. It was only years later that we began to understand that [filming] was closed down for a particular reason and that was because of inappropriate sexual behaviour by Spacey.”

The Times further clarifies that the Usual Suspects Spacey incident involved an accusation of “sexually inappropriate behaviour towards a younger actor.”

I don’t doubt that Byrne wasn’t aware of the full extent of Spacey’s violence. Stories about Spacey’s sexual antics, and speculations about his sexuality, were fodder for rumor and gossip mills for years, but abusers often do an excellent job of presenting an amiable facade for their friends and co-workers and the world at large.

Spacey, a consummate and accomplished actor, no doubt succeeded in projecting the image that he wanted for many, many years. The Usual Suspects came out more than twenty years ago, and Spacey won an Oscar for his work in that, and another for American Beauty five years later. I now wonder how the matter of Spacey’s behavior on the Usual Suspects was handled, since its director was Bryan Singer, and Spacey apparently continued on unimpeded, and then considerably lauded.

Byrne also addressed the matter of Harvey Weinstein, a producer whom he worked with several times, and conflated him with Spacey, calling the two men “bullies” who shared “that element of absolute abuse of power.” As with Spacey, Byrne said that he was somewhat aware of Weinstein’s behavior, and called him an all-around abusive sleazebag:

“I did three movies with Harvey Weinstein, and I knew he was a sleazebag. I knew he was a vile bully and I saw his bullying up close. I saw him be absolutely appalling, not just to women but to men as well. He had very little respect for any kind of human being. He wanted his stars around him.”

I appreciate Byrne’s frankness, but when he went on to discuss the extent to which he knew of Weinstein’s transgressions, a troubling theme of why so much sexual harassment and abuse is allowed to continue and fester emerges:

“I had heard vague rumours — I have to stress that they were vague — of doors being locked and women being compromised. I heard that once or twice from two very well known actresses, but the problem when you hear something like that is, do you pass that on? Because if it’s not true it’s awful, and if it is true it’s not your job to say, ‘Well, I wasn’t there, the door was locked, I don’t know what happened, I just heard the story.’ But I did not know, and many people didn’t know, the extent of the violence that he perpetrated on women.”

Even though Byrne had heard damning rumors, and disturbing stories straight from the mouths of actresses who were presumably his friends and colleagues, and witnessed awful behavior himself, he still spun his wheels—and continued to work with Weinstein, a vile, appalling, sleazebag villain.

“Do you pass that on?” he wonders. Yes, Gabriel, I would venture to say that you should have, even just as a warning to others who might have been uninformed. As a well-regarded man in Hollywood, Byrne stood in a position of greater power than Weinstein’s victims. At the very least, he had the choice not to engage with the Weinstein brand himself.

But “if it’s not true it’s awful, and if it is true it’s not your job to say, ‘Well, I wasn’t there, the door was locked, I don’t know what happened, I just heard the story” is the heart of rape culture. First, the assumption that multiple stories repeated from women about a known vile man might not even be true, because we can’t be sure that those women aren’t lying liars who lie about such things.

Secondly, the passing of the buck, the easy assumption that “it’s not your job to say”—or take any kind of stand—about what happened because you weren’t there, and again, the possibility of reasonable doubt seems to preclude the safety of current and future victims. Imagine if a phalanx of Hollywood actors had united and come out against Harvey Weinstein—or Kevin Spacey—years ago. How many lives might have been changed?

If it’s not the job of people like Byrne, who appears to align himself as an ally who cares about victims and condemns abusers, to push back against blatant abuse in his industry, whose job is it? We saw who finally took up this task: brave women like Rose McGowan and men like Anthony Rapp owning their stories, reporters who did not back down from writing those stories, all of them braving the backlash of some of the most powerful men in Hollywood.

While voices like Byrne’s are always a welcome addition, it is his previous silence that speaks volumes. It’s not enough to say “I knew about this and didn’t like it but I didn’t do anything” anymore. It would have meant a lot if Byrne had added something like, “I regret not taking steps to help before, and look forward to advocating for victims whenever in my power.” We need to see more actions and active change going forward and less navel-gazing at the past.