What Is Actually Up With That X-Men: Days of Future Past Sentinel? 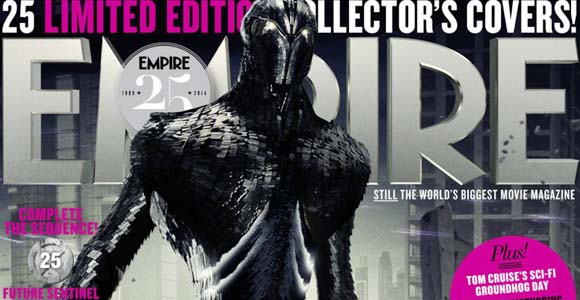 Folks seemed very interested in Empire’s slew of X-Men: Days of Future Past magazine covers yesterday even though we’ve seen most of the characters already in the trailer. But one new thing the covers did reveal was the “future” look of the mutant-fighting Sentinels and fans are curious about the look.

While we’ve yet to really see them in action, the “past” Sentinels certainly give off a vibe akin to the purple comic book creations (though not anywhere near as close as that danger room version we saw in X-Men 3). In the X-Men issue of Empire, production designer John Mayhre spoke about the look of this future Sentinel:

They’re biomechanical weapons. We had to come up with what would be the ultimate version that could actually, in principle, stop the X-Men. We started with this idea that they were almost made up of magnetic plates slapped over one another, imagining that the plates could contract or grow, so the Sentinel can be skinny to get through a small space or the plates can open up to become a bigger shape. So they have become virtually unstoppable.

Not sure how that relates to the powers of say, Magneto, but sure, it seems like a good idea in theory.

What do you think of either the past or future Sentinel designs? Would you have preferred they stayed closer to how they look in the comics?

X-Men (team)X-Men: Days of Future Past