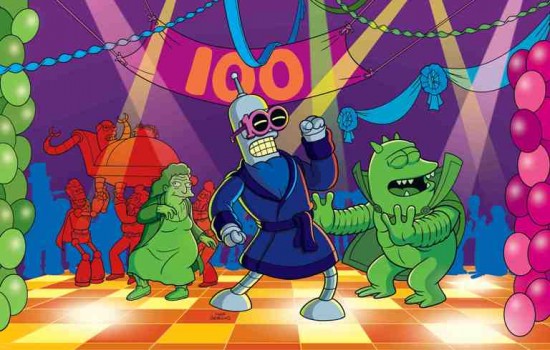 It’s been a rocky road for everyone’s favorite soon-to-be-retro-futuristic prime-time cartoon show, what with the cancellation, the network changes, the semi-return, and then the full return.  But Futurama is finally coming up on its 100th glorious episode, and, as you can see, someone’s planning a party.

(The rest of this post contains plot spoilers for this week’s upcoming Futurama episode.  On the other hand, if you click through, you’ll be able to grab a desktop-sized version of the image above.  Choose wisely.)

The Planet Express Crew has been hired to make their 100th delivery and Bender begins planning the party of the millennium. Meanwhile, however, the rest of the crew attends a fundraiser where Fry accidentally outs Leela as a mutant who is illegally living above ground. For that, she is banished to the sewers where her fellow mutants reside in futuristic squalor. Feeling guilty about his slip-up, Fry and the rest of the gang – along with the mutated members of Devo – join Leela in an epic mutant revolution against the surface dwellers.

Sadly, this episode will mark the end of this season of Futurama.  Until next season, ALL GLORY TO THE HYPNOTOAD.