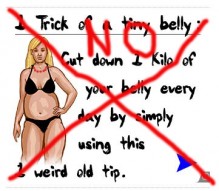 The Federal Trade Comission has filed a whopping 10 lawsuits against some of the companies responsible for the ubiquitous Internet ads selling fruit-based diet products, according to the Washington Post. Trust me, you’ve seen these ads around. They all feature shoddily animated bellies oscillating back and forth from fat to thin, and promising a “tiny belly” or “one tip” for weight loss. Clicking on such an ad usually leads to a faux-news website which in turn leads to another site where customers can order weight loss products derived from acai berries or mangos.

Many of the ads sell products from companies like HCG Ultra Lean Plus, using a formula copied by many other marketers. But placing an order for a “free” sample through one of these sites usually leads to something much worse. From the Washington Post:

Someone who orders a sample offered by one hCG marketer, for example, is technically agreeing to pay an additional $79.99 for another shipment of the product two weeks later, and another $79.99 six weeks after that, according to the disclaimer. The charges and the product keep coming until the buyer calls a toll-free number to cancel.

The ads were made by a cadre of companies operating independently of each other and spending around $10 million in total to place the ads. All told, this seems to have brought in billions of pageviews for the advertisers, which the FTC claims led to huge profits.

From the report, very little about the ads appears to be real. For instance, the ads posing as “investigative reports” by a fictitious news agency used a picture of French TV news anchor Melissa Theuriau, who was understandably surprised to find her face had been used in the scheme. Furthering the fiction, the fine print on one such site run by IMM Interactive contains this rather amazing catch-all cop-out:

In addition to fake news anchors and suspicious endorsements, the marketers tended to go after high-profile websites like Facebook or online news outlets. The sheer saturation of ads and the reputable backdrop likely played a role in the ads’ success.

Despite the slew of lawsuits by the FTC, the ads aren’t likely to be going away anytime soon. There are apparently dozens of other marketers who have noticed how successful these ads have been and have copied their formula. The actions by the FTC is certainly a good start, and perhaps will take a chunk out of this business, but it could be a while before Internet denizens can go a day without being assaulted by these ads.