You gotta hand it to them. 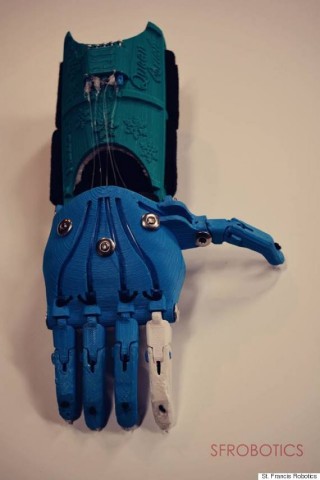 Ariah is a 6-year-old girl who was born without most of her right hand. When the robotics program in Deer Creek Intermediate School in St. Francis, Wisconsin learned about her, they decided that they would do something to help her out.

The program had 15 students who met for 15 minutes every day during their lunch to create what soon would be Ariah’s prosthetic hand, guided by their teacher, Peter Graven. E-Nable, a volunteer network who makes prosthetic hands, also teamed up with the middle schoolers. The program had access to a 3D printer and used about $20 worth of material.

Through email, the team learned a little bit about Ariah, who lived in California. She was really into Frozen, and that inspired the hand’s design. It took them approximately two months of planning, printing, and assembling, before crafting a final product that had snowflakes and the engraving “Queen Ariah” on the side.

The team sent the prosthetic off, and, via webcam, Ariah was able to show off her new hand for the first time to the students who built it. Thanks to their heart-meltingly kind generosity, Ariah can now do simple tasks she couldn’t do before, which is pretty cool. The kids in the robotics program also made some new friends while working on the prosthetic. They definitely deserve a round of applause for their hard work – and maybe a free trip to Disney World with Ariah? C’mon, Mouse. We know you’ve got the cash.