This Robot Is Your Future Mail Carrier | The Mary Sue

This Friendly Neighborhood Delivery Robot Could Be Your Future Mail Carrier 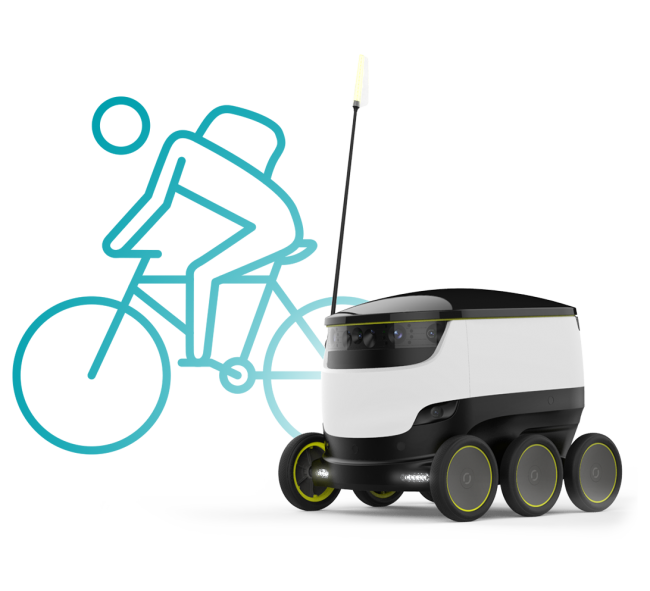 Starship Technologies’ new delivery robots have been traipsing around the sidewalks of San Francisco, giving post office couriers a run for their money. The six-wheeled, package-carrying robots only perform local deliveries, and they’ve only been tested on a small scale so far, but the results sound promising.

Last year, Starship Technologies tested out the sidewalk deliverers on the sidewalks of London, as well as in select cities in the United States. Those tests are ongoing, so don’t be surprised if you see these little robotic pals popping up in a metropolitan area near you, delivering packages to and fro.

SF Chronicle reports that Starship–which is headed up by Ahti Heinla and Janus Friis, who are two of the co-founders of Skype–began with a much more far-reaching idea about robotics. Heinla and Friis got into the robot game by entering one of NASA’s many robotics challenges; the pair built a robot designed to collect samples on the surface of Mars. “We didn’t win,” Heinla admitted, “but that team became the engineering team for Starship.”

That explains the name “Starship.” These little sidewalk robots can’t make deliveries in the outer reaches of space; they operate within a 2-mile radius. That’s by design, of course. The couriers are meant to provide on-demand services to local shops who can afford to rent them, not compete with massive delivery mainstays like FedEx and UPS. It sounds like these robots do great at making quick food deliveries, for example. (If Starship hooks up with that other start-up that made the pizza-making robot, then your entire dinner plan could get automated.)

The courier robots are guided by a human operator, but one human can control 100 bots and ensure that they each get to their intended location and make their delivery… so it does still seem like a whole lot of humans would be out of a job if this project ended up going worldwide. But, hey. At least the robots are really cute? And apparently, people aren’t put off by them at all. (Probably because they don’t realize these robots are taking our jobs. AGGHhhh.)

Heinla says, “We were worried people would be afraid and would call the police, but most people don’t give them a second look.” The robots are designed not to run into people, which puts them a cut above Amazon’s delivery drones, which have been known to bother people and wildlife. Making a delivery robot into a fellow pedestrian makes a lot more sense than worrying about air regulations.

Another upside: package deliverers and receivers can communicate directly with the robots and schedule specific 10-minute windows for the courier to roll by and drop off the goods. Starship’s website says that the bots keep the parcels locked safely away until they’re delivered to the right person. I’m not sure how they verify that process, but I’m guessing it’s all done online.

Getting a package delivered by robot will probably not be a commonplace reality for many years, and even then, it’ll likely be a specialized and expensive service rather than a widespread one. So perhaps post office workers don’t need to worry about robot takeovers quite yet. But it’s definitely coming.