Robotic Glasses Promise To Give You Friendlier Eyeballs

That's right, even your eyeballs aren't good enough on their own anymore. 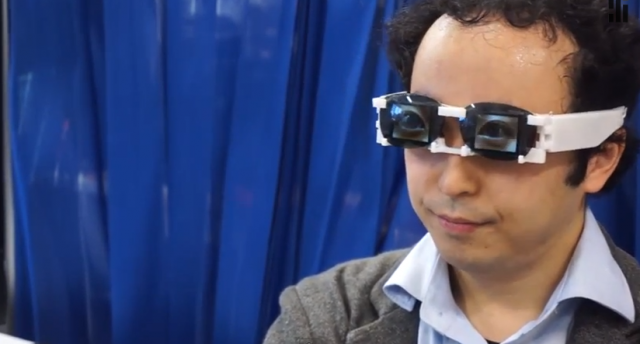 Someone once said that the eyes are the window to the soul. That guy must not have been familiar with “chronic bitchface,” which is when your resting facial expression makes you look like you want to set things on fire. Thankfully, now there’s a solution for those of us who have to constantly reassure our friends and coworkers that we’re not upset.

Developed by Dr. Hiroto Osawa from  Tsukuba University in Japan, AgencyGlass is a piece of wearable tech designed to alleviate what’s known as “emotional labor.” Basically, if you work in some kind of a service position — as a flight attendant, sales clerk, medical professional, or waiter, for example — part of your job is to pretend to be happy and friendly all the time so that you don’t stress your customers out and make them not want to visit your place of business ever again. Naturally this kind of forced politeness can be incredibly taxing on a person’s mental state, which is why AgencyGlass removes some of the burden by replacing your eyes with a set of friendlier, more agreeable ones. Check it out in action below:

The device responds to the wearer’s motions using a gyroscope and accelerometer and can tilt its eyes left and right accordingly, as well as upwards to simulate thinking. It also blinks every once once in a while, just to make sure you don’t look like a complete crazy person. After all, you’ve already got a giant pair of robot glasses strapped to your head.

An external camera also recognizes the faces of others around you and moves the pupils accordingly. Which is useful if you’re talking one on one with someone or trying to convince potential shoplifters that you’re on to them, but maybe not so great for — well, not creeping regular people out.

While Osawa has received some light criticism from his peers for engineering a product that would technically be “deceiving” people around the user, he feels that the added benefits of improving a worker’s perceived social skills are worth exploring. Still, there’s something kind of offputting about acknowledging the fakeness of emotional labor like this. Either way, we’re still making fun of people in Google Glass, so I’m going to take a wild guess and say we’ve got a ways to go before AgencyGlass becomes the sort of thing you actually see people wearing on a regular basis.