Geeks are the Artistic Vanguard of the Internet: Freddie Wong and the Future of Film 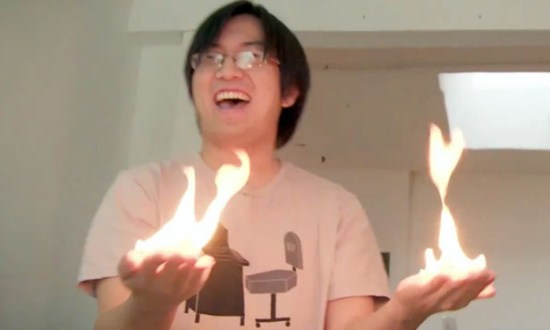 When Freddie Wong talks, he does it with the same frantic energy and humor that have made him famous. This is especially true when speaking about his decision to quit his old job, working on direct-to-DVD films and jump into working exclusively online.

When faced with the proposition of another feature-length project, Wong said that he and Brandon Laatsch, his partner in the video arts, asked themselves if they could do something new. It was clear to them that the Internet was changing how the film business was done, and that they should be a part of it. “At the time, it felt like if Apple computer had just come out and we were typewriter salesmen,” Wong said at the Blip.TV offices in Manhattan. “So, should we keep selling typewriters?”

Wong has come a long way since that decision. He and Laatsch are now part of the curious collection of genuine YouTube celebrities. But unlike many eCelebrities, they’ve managed to turn the millions of views on YouTube into cash.

For some, this could just mean getting a nice fat paycheck. But for Wong, it meant being able to practice a craft. Short films have traditionally had a small audience, and are often viewed as a stepping stone toward larger projects. “Going through film school, everybody said, ‘here’s how you break in: you make a short film or a music video, and that’s your show piece,’” said Wong.

“What they don’t tell you is that’s what they did way back in the day. Nobody really cares anymore.”

Instead, Wong wanted to continue working on his short pieces and get normal people, not just Hollywood insiders, to see them. Rather than a stepping stone, he saw short film as a craft in its own right and wanted to explore everything it had to offer. And it seems to have paid off. Wong’s latest video, released on YouTube just five days before writing, has already accrued over 2 million views.

Of course, his latest film is called Jedi A-Holes Strike Back, and follows the misadventures of two jerky Jedi (one played by Wong) that take pleasure in tormenting normal folks with their Force powers. In one segment, they attach lightsabers to their car, slicing down telephone poles. In another, they levitate a car and hurl it into space.

This may not be what you would typically think of as a short film. Instead, it feels like the fare we’ve come to expect on YouTube; it’s funny, irreverent, and steeped in popular culture. Wong says this isn’t because directors don’t want to make more “serious” projects for the web, but that the web just isn’t ready for those stories. Back when he was working on other projects, he’d be approached by other filmmakers with less humor-driven ideas for new web series and online projects. “It might be great,” he said. “But right now, something really dramatic probably won’t play well.”

In Wong’s view, this is because the whole concept of a online video is still very much in its infancy, and has mostly been embraced by what he calls “a core nerdy crowd.” This section of the entertainment-consuming populace is more open to new forms and formats, and what plays to their interests is going to be successful right now.

“Think about Napster,” said Wong. “Remember when Napster came out? Were you able to get classical music or Kenny G on Napster? When it first came out, it was video game music, it was Metallica, it was techno.” The geeks and the nerds, says Wong, are the vanguard group that drive innovation not only in the technical world, but in the arts as well. After Napster and the nerds who loved it introduced the world to the idea of downloading music (and also made MP3 piracy a household phrase) Apple came along and took over the music industry with the iTunes store. Because nerds spent hours downloading The FF7 OST on a dial-up connection, we now have the largest music retailer in the world at our finger tips.

It may sound like Wong advocates pandering to one’s followers, but he sees his work as a new paradigm for how creators will interact with their audiences. “We’re coming at it from the opposite direction,” he said. “Let’s build this audience, let’s grow this audience, let’s get to know that audience.” In his mind, the old model where creators throw their creations into the wild and simply hope for the best isn’t the only way of doing business. Frequent production and involving the audience through social media is as much a part of filmmaking to Wong as cameras and boom mics.

Despite his success, Wong sees his work as just the tip of the iceberg. He believes that while the geeks are the dominant force driving online entertainment, it won’t last. “As more people get into it and get familiar with it, more diverse types of content are going to be able to flourish,” he said. The dramas, the bold and challenging works are coming soon to the web, and they’ll be built on the foundation of Jedi A-Holes.