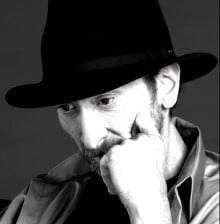 Legendary graphic novelist Frank Miller — you may know him as the guy behind The Dark Knight Returns, Sin City, and 300, appears to have recently joined Twitter with the username FrankMillerInk.

The account has yet to be verified, so it may just be a hat-clad impostor, but MTV’s Splash Page reports that ““The Spirit” movie producer F.J. DeSanto and “Fanboys” director Kyle Newman have lightly verified the account with their own tweets.”

A few more points of evidence in favor of this being the real Miller:

No guarantees, but we’re hoping against hope it’s for real.