This week, at the annual New York Museum of Comic and Cartoon Art Festival, Frank Miller took part in a panel on the “art of superheroes,” where he grumpily confirmed that he is no longer making his 122 page “Batman Fights Al-Qaeda” opus.

Fellow panelist Kyle Baker mentioned that he prefers to keep politics out of his superhero comics, leaving such heady subjects as religious extremism and the war on terror to his self published work.  When he acknowledged that “trying to shoehorn Batman into Afghanistan” was more Miller’s speed, Miller replied “No, I’m not doing that anymore.”

Well, thank god.  Miller announced that he was working on a comic where Batman fights off an Al-Qaeda attack on Gotham city back in 2006, leaving many wondering “But Frank, where will you put the whores?”  Lets take a look at how he has described his inspiration.

For the first time in my life, I know how it feels to face an existential menace. They want us to die. All of a sudden I realize what my parents were talking about all those years. Patriotism, I now believe, isn’t some sentimental, old conceit. It’s self-preservation. I believe patriotism is central to a nation’s survival. Ben Franklin said it: If we don’t all hang together, we all hang separately. Just like you have to fight to protect your friends and family, and you count on them to watch your own back. So you’ve got to do what you can to help your country survive.

Here’s one way to tell if your Batman-comic idea is unfounded: Grant Morrison says it’s crazy.

Batman vs. Al Qaeda! It might as well be Bin Laden vs. King Kong! Or how about the sinister Al Qaeda mastermind up against a hungry Hannibal Lecter! For all the good it’s likely to do. Cheering on a fictional character as he beats up fictionalized terrorists seems like a decadent indulgence when real terrorists are killing real people in the real world.

Miller’s comics, to put it mildly, tend towards self-indulgence, but with Holy Terror, Batman! he just wanted to remind us of a part of comics history.

It is, not to put too fine a point on it, a piece of propaganda…

Superman punched out Hitler. So did Captain America. That’s one of the things they’re there for. — BBC News

Perhaps this the sort of thing he was talking about? 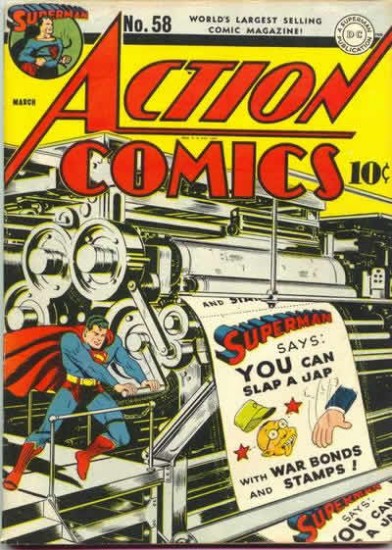 Because that hasn’t at all become radically offensive.