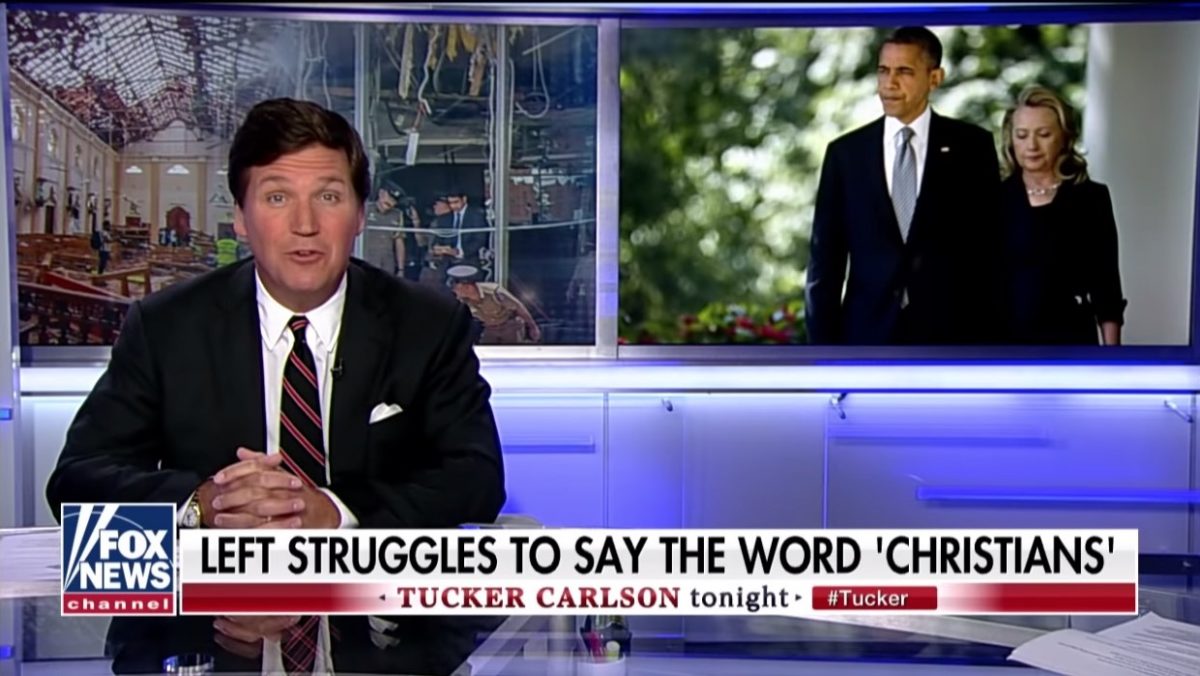 As Donald Trump’s post-Mueller Report release approval rating continues to drop, the basically state-run propaganda machine that is Fox News looks to be working overtime to find distractions for their audience. Their latest: Faux outrage for Hillary Clinton and Barack Obama over use of the term “Easter worshippers.”

Both used the term when offering support and condolences for those affected by the recent terrorist attacks in Sri Lanka, as did other leaders like Rep. Ilhan Omar and Julián Castro. The wave of bombings hit Christian churches and luxury hotels in the majority-Buddhist country, leaving more than 300 people dead and hundreds more wounded.

On this holy weekend for many faiths, we must stand united against hatred and violence. I’m praying for everyone affected by today’s horrific attacks on Easter worshippers and travelers in Sri Lanka.

The attacks on tourists and Easter worshippers in Sri Lanka are an attack on humanity. On a day devoted to love, redemption, and renewal, we pray for the victims and stand with the people of Sri Lanka.

A number of Fox News hosts (including Tucker Carlson up there) and other conservative pundits were not too pleased with the former leaders’ use of “Easter worshippers” to describe the victims who were, in fact, worshipping, on Easter, when the attacks took place.

Easter Worshippers? This is a made up phrase. Why do liberals make up phrases like this? #TheFive pic.twitter.com/tsOznc5euF

Hillary after New Zealand attack: My heart breaks for the Muslim community.

Hillary after Orlando attack: I am an ally of the LGBT community.

Hillary after Sri Lanka: Praying for Easter worshippers and tourists.

Are we really supposed to believe that this isn’t intentional? https://t.co/CmeGYpggQQ

How do President Obama and Secretary Clinton both come up with Easter worshippers in their tweets about the murders in Sri Lanka? To have both of them use the same term the same day is strange. Is Easter Worshipper the left’s new way to avoid the word Christian? Pathetic

Easter Worshipers? If I’m not mistaken, Christians worship God and Jesus. Never heard such nonsense…be like “CHRISTMAS worshippers were out shopping like madmen”

I bet they would prefer just being called… CHRISTIANS

No one is saying that these horrific attacks weren’t motivated by religious animosity. No group has claimed responsibility for the bombings, and religious violence is reportedly rare in Sri Lanka—and typically limited to Muslim-Buddhist tension—though according to The Guardian, there has been a “significant increase in attacks against Christians” in the country recently. But not only is the use of “Easter worshippers” accurate (again, the bombings happened during Easter service), it’s inclusive of the non-Christian friends, family, and other visitors who were affected.

Both Clinton and Obama are practicing Christians, by the way, because no matter what they constantly claim, the right does not have a monopoly on faith.

Saying “Easter worshippers” isn’t an insult to or a diminishment of Christians hit by these attacks. These conservative figures are, however, constantly minimizing the effect of terrorism on Muslim communities. The vast majority of terrorist violence is inflicted on Muslim communities, yet Fox News and Republican leaders often refuse to even categorize that violence as terrorism.

The disparity in their coverage of these attacks is rooted in hypocrisy, as is their criticism of Democratic leaders’ heartfelt messages of support. How hypocritical, exactly? Check out this headline published on Fox News’ website. (It’s a republished AP article, but they chose to leave the headline unchanged.)

At least they got the approval of the only person they actually care about impressing.

Sorry to say but @foxandfriends is by far the best of the morning political shows on television. It rightfully has BY FAR the highest ratings, not even close. Morning Psycho (Joe), who helped get me elected in 2016 by having me on (free) all the time, has nosedived, too Angry…