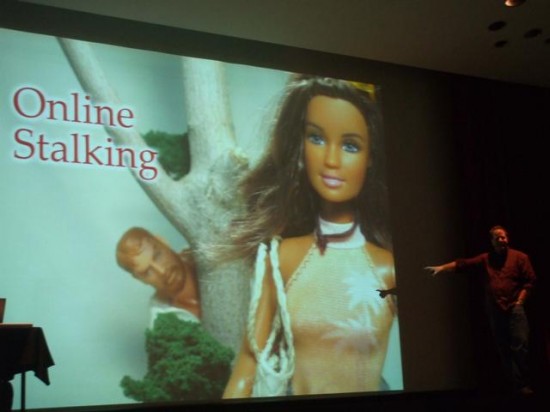 “Investigative reporting” or creeping, you decide: To show Guardian reporter Leo Hickman was able to track down a woman selected at random with her Foursquare account, recent tweets, and personal details acquired from Google searches, including a photo. Needless to say, Louise was quite “unnerved” when a reporter showed up at the central London pub she was in.

In his article, Hickman “reports”:

“Louise has straight, auburn hair and, judging by the only photograph I have of her, she’s in her 30s. She works in recruitment. I also know which train station she uses regularly, what supermarket she shopped at last night and where she met her friends for a meal in her home town last week.”

With a dossier as creepily detailed as that, there’s no need to hack someone’s phone number anymore; everyone provides the information for you already. Interestingly, when Louise is confronted, though she calls the encounter “a little unnerving,” she also cites Foursquare’s “excellent uses for business,”  specifically when it comes to “stalking” potential recruits. What a meta-stalking world we live in!

A recent study of 1,500 “geolocative” service users revealed that 55 percent are worried about privacy loss. Yet despite these concerns, the relatively new “geolocative” service logged its one millionth daily check-in last week, Mashable reports, suggesting more and more users do not mind announcing their itineraries to the rest of the world.

Yet another 45 percent said they worried about letting robbers know their location, whether in or out of the home. Don’t worry, potential robbers, there’s already a website for that too.

What it comes down to is that, quite simply, the majority of people like to announce to others the awesome/exclusive/hilarious event they’re attending. As dear Louise said: “Checking in at home is really stupid. But people can still give away clues via Twitter, as I’ve obviously been doing. I suppose the benefit of checking in is to create a relationship, or say to people that you’ve gone somewhere interesting. It’s all part of social competitiveness, I suppose. It has become a habit for so many of us.”

(via peHUB via Guardian; image via The Tennessee Journalist)