Sean Baker’s Tangerine was a game-changing film in a number of ways. Not only because the entire thing was beautifully shot on an iPhone, but there was a messy, DIY feel to the movie that refused to adhere to the typical format of traditional storytelling act structure and subverted expectations of how a comedy(ish) about transgender sex workers was “supposed” to look and feel. Most notably, it gave a big middle finger to the Hollywood idea that these types of characters don’t have stories audiences want to see, and that there is any valid reason whatsoever for ignoring the existence of talented transgender actors. While Tangerine was wholly ignored by the Academy and the Hollywood Foreign Press, it gained wide acclaim at festivals and other awards events, as well as near-universal praise from critics and audiences. Fans have waited two years to see what Baker would do next.

Now we have the answer, in the form of this trailer for his upcoming film, The Florida Project (which has, itself, been getting rave reviews out of festivals this year). In the same spirit of exploring (per the synopsis) “contemporary lives lived in the margins that are otherwise too easily forgotten,” The Florida Project is set in Florida, just outside of–but worlds away from–Disney World. Here’s the official synopsis:

“Set on a stretch of highway just outside the imagined utopia of Disney World, The Florida Project follows six-year-old Moonee (Brooklynn Prince in a stunning breakout turn) and her rebellious mother Halley (Bria Vinaite, another major discovery) over the course of a single summer. The two live week to week at “The Magic Castle,” a budget motel managed by Bobby (a career-best Willem Dafoe), whose stern exterior hides a deep reservoir of kindness and compassion.

“Despite her harsh surroundings, the precocious and ebullient Moonee has no trouble making each day a celebration of life, her endless afternoons overflowing with mischief and grand adventure as she and her ragtag playmates—including Jancey, a new arrival to the area who quickly becomes Moonee’s best friend—fearlessly explore the utterly unique world into which they’ve been thrown. Unbeknownst to Moonee, however, her delicate fantasy is supported by the toil and sacrifice of Halley, who is forced to explore increasingly dangerous possibilities in order to provide for her daughter.”

A movie with that synopsis could easily give way to some sex work-shaming, white savior nonsense. But Baker has proven that he can handle this sort of material with an honest, respectful, powerful eye. From the look of that trailer, this film feels like it has the potential to fit in with any great coming-of-age story, but as a version of that genre that usually goes untold.

Also, I’m fully in love with this poster: 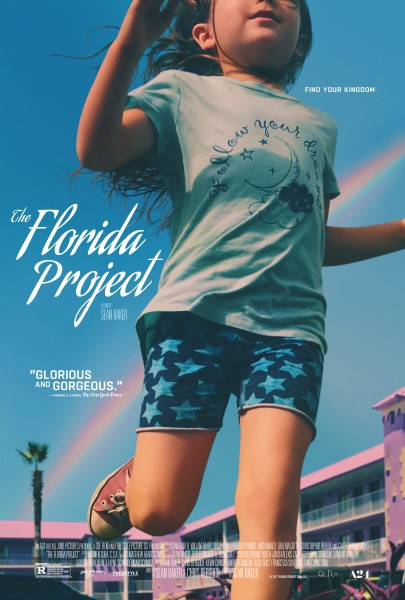