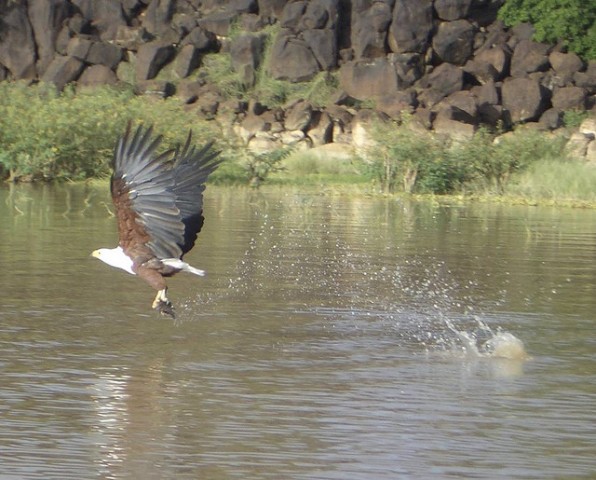 Ever see a picture of a majestic bald eagle snatching a jumping fish out of the air and think, “That’s just too awe-inspiring to be real?” You were right. One man, an enormous slingshot, and a lot of dead fish are apparently behind  many of these stunning shots of American wilderness.

Ken Kester of Le Claire, Iowa and his amazing dead-fish slingshot have been the talk of many a small-town newspaper lately. Sure, a dead-fish slingshot sounds like something only Muppets use, but wilderness photography is a large source of revenue for Le Claire, and Ken Kester has designed a contraption to keep shutterbugs returning to the river year after year.

Conservation officer Jeff Harrison explains, “On a nice day, the photographers will be elbow to elbow there at Lock and Dam 14 trying to capture eagle pictures. It’s a popular place.” As many as 150 photogs have been known to crowd the riverbank at one time, which is why it could have been a huge blow to the town when the river’s current was altered, and eagles were less attracted to the idyllic spot.

In past years, eagle enthusiasts such as Kester used to throw dead fish into the current to attract the birds—a practice that Harrison says is ecologically harmless, as long as the fish come from a local pool of water. Once the current changed, throwing fish in manually was no longer enough to attract eagles, so Kester naturally built an enormous slingshot to sling the bait out farther into the water than ever before.

“You have to get the fish out there a couple hundred feet,” Kester says, “into that comfort zone for the eagles. It brings the birds in and allows more opportunities to get a dramatic shot.”

Harrison is inclined to poop Kester’s party, saying that, while there’s nothing environmentally unfriendly about attracting birds of prey using a massive dead fish slingshot, “I don’t know if I agree with it. Some of these photographs show up in some pretty big magazines, and they are more or less staged.”

Sure, it’s a bit of a bummer if you now feel these shots were totally fabricated, but I think Kester and his bizarre contraption are more interesting right now than anything Mother Nature has for us.

We know far less about the enigmatic Ken Kester than we would like to about someone who easily designed an enormous fish slingshot. The Quad City Times tells us he’s been an avid photographer for 14 years and works in the railroad industry, and besides that, all we really have to go on is this fairly blurry video.

Despite its poor quality, it’s still worth watching just to see the sheer size of the slingshot and the effort required by Kester to use it.

If you read this, Mr.Kester, what’s your deal? Are you single? And will you please come to New York and design Rube Goldberg fish machines for us?

(via abc, images via Shadowfax The Second)