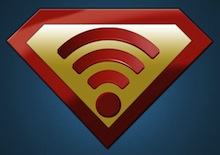 Rice University has issued a statement saying that Leticia Aguirre, a 48-year old Houston grandmother, is the nation’s first user of “Super WiFi” technology. The technology has been in the works for some time and promises to better access to users in the future.

Aguirre was already receiving Internet service through a community WiFi network that covered three miles, but apparently never received adequate access since she lived on the edge fo the network. This made her the perfect candidate for Super WiFi, since the technology is meant to provide more coverage than traditional WiFi. Unlike the wireless internet access many of us now take for granted, Super WiFi has greater range and can penetrate further through obstacles. From Rice University:

To users, the new hot spot looks like any other; it can be accessed with any Wi-Fi device. Behind the scenes, the network uses “dynamic spectrum access” to automatically shift between traditional Wi-Fi and unused UHF digital TV channels to provide the best possible coverage.

The University is looking to expand its Super WiFi network to cover some 3, 000 users. On a larger scale, they’ve received federal funds to develop an open-source approach to creating and managing the new network that could be emulated by other cities. The end goal will be to provide Internet access to underserved and rural communities, bringing more of the American public online. But for now, Leticia Aguirre can enjoy her cutting-edge connection while we look on in envy.