If you're among the legions of people who uses the Internet solely for viewing filth, this could actually be a time saver. 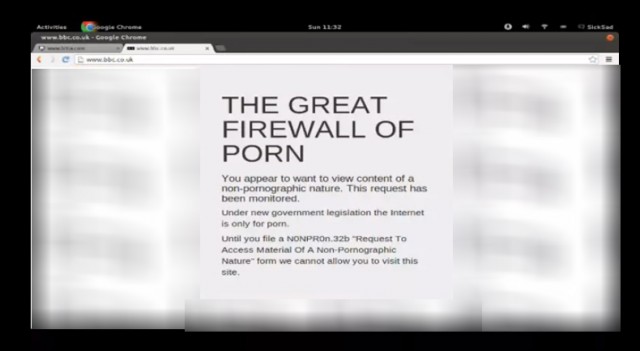 Here’s what sicksad had to say about the project on his blog:

So taking inspiration from other great Internet filtering nations such as North Korea, China, Syria, Iran, Cuba, Bahrain, Belarus, Burma, Uzbekistan, Saudia Arabia and Vietnam I decided to help out the UK government and build an Internet filter that only allows pornographic material through.

Okay, so while it might be more efficient to block non-porn content, this is probably not exactly the Internet filtering solution that David Cameron and his team had in mind. That said, it certainly does drive home the point of how ludicrous it is to have to ask the government for permission to view anything on the Internet — whether it’s your email or Anthony Weiner’s latest round of dick pics. Of course, depending on who you are, your email might just be the home of Anthony Weiner’s latest dick pics, but we digress.

The filter is actually pretty simple and elegant, querying the porn-identifying OpenDNS FamilyShield server every time you try to open a page. The project flips the instructions for FamilyShield 180 degrees, though — if a site would be blocked by FamilyShield because of pornographic content, it’s allowed through the firewall. If it would normally be allowed, the site is blocked, sending users to a page that informs them that they’ll have to fill out a request form so the government will allow them to view non-pornographic content, because that seems reasonable, right?

You can get a look at plans for how to build your own version of the Python-programmed project over on Github. If you want to get a look at it in action, though, check out the (NSFW) video below.