My Favorite 'My Hero Academia' Scene After 100 Episodes

I figure heroes cry when they need to, don't they? 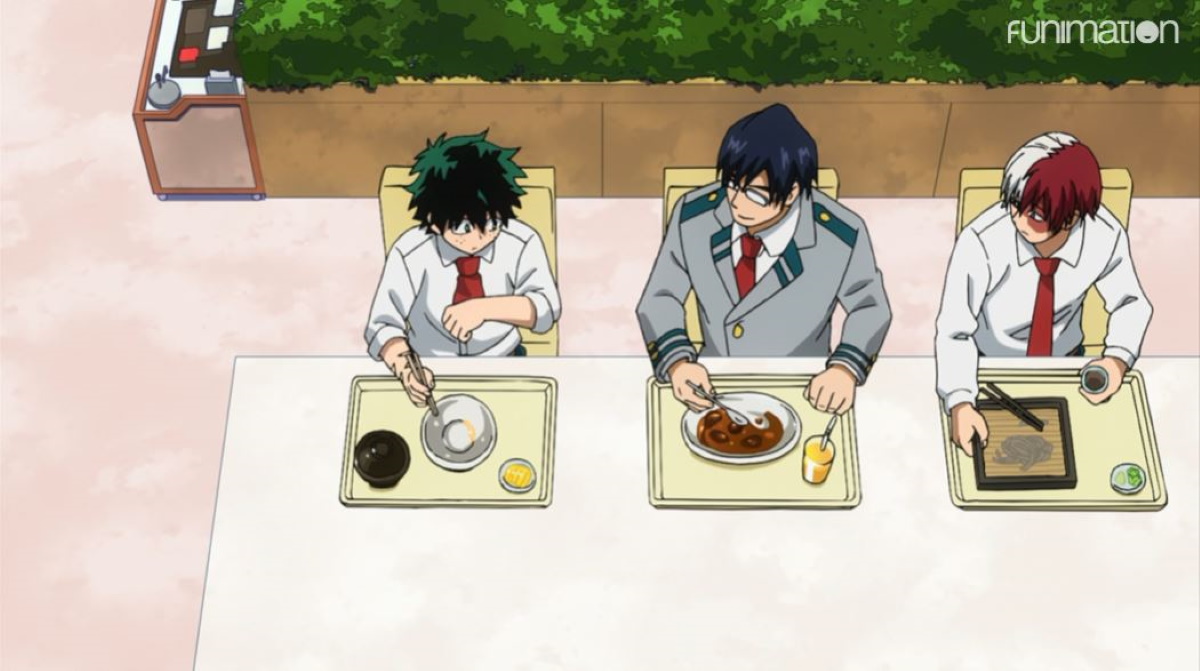 Slight spoilers for My Hero Academia seasons 2 and 4

My Hero Academia will be airing its 100th episode tomorrow. To celebrate, I thought I’d talk about one of my favorite scenes in the entire anime.

To be honest, there are a lot of moments to choose from when it comes to the Misadventures of Izuku “I’m not really breaking my bones at this point but no one will ever forget how chaotic I am” Midoriya, but I wanted to highlight one that I feel captures the heart of the series and why I love these kids so dang much.

It’s a moment from the 70th episode of the series, which brings us into season 4. This is the season where we’re introduced to Kai Chisaki, who (outside of All For One) feels like one of the most nefarious villains the kids have had to face. While there is an entire league of villains, Shigaraki is still learning the ropes of how to be intimidating, so having to deal with a villain who’s using a child to further his agenda is a lot for Izuku and the others involved to deal with.

Also, they’re dealing with the Yakuza.

Izuku and Mirio have been feeling REAL bad about not saving Eri when they ran into her during their work-study patrols, especially when they (and everyone else involved) learn the severity of the situation. Kai’s been completely breaking Eri and putting her back together again (like, literally, because his quirk lets him disassemble and reassemble whatever he wants). He’s been doing this because he wants to use her quirk (which lets her reverse someone’s body to its previous state) to create quirk erasing bullets.

The worst part is that Eri willingly went with Kai to protect Izuku and Mirio because she knew that Kai would probably obliterate them on sight.

Izuku and Mirio can’t help but wonder if they could’ve saved Eri at that moment, but the hard truth to swallow is that them interfering with something as big as the Yakuza without a plan would’ve had dire consequences.

While the heroes are making a plan to rescue Eri and take Kai’s organization down (the League of Villains are also involved, btw), everyone has to keep what’s going on a secret. Oh, and go about their regularly scheduled school lives. This means the UA students who are involved have to go to class and pretend like their work-study isn’t about to become a giant mission against the Yakuza.

This weighs heavily on Izuku, who is also dealing with Sir Nighteye’s prophecy about All Might, Izuku’s childhood idol, being killed.

This brings us to my favorite scene: the moment where Izuku’s friends, Tenya and Shoto, offer him part of their lunch. 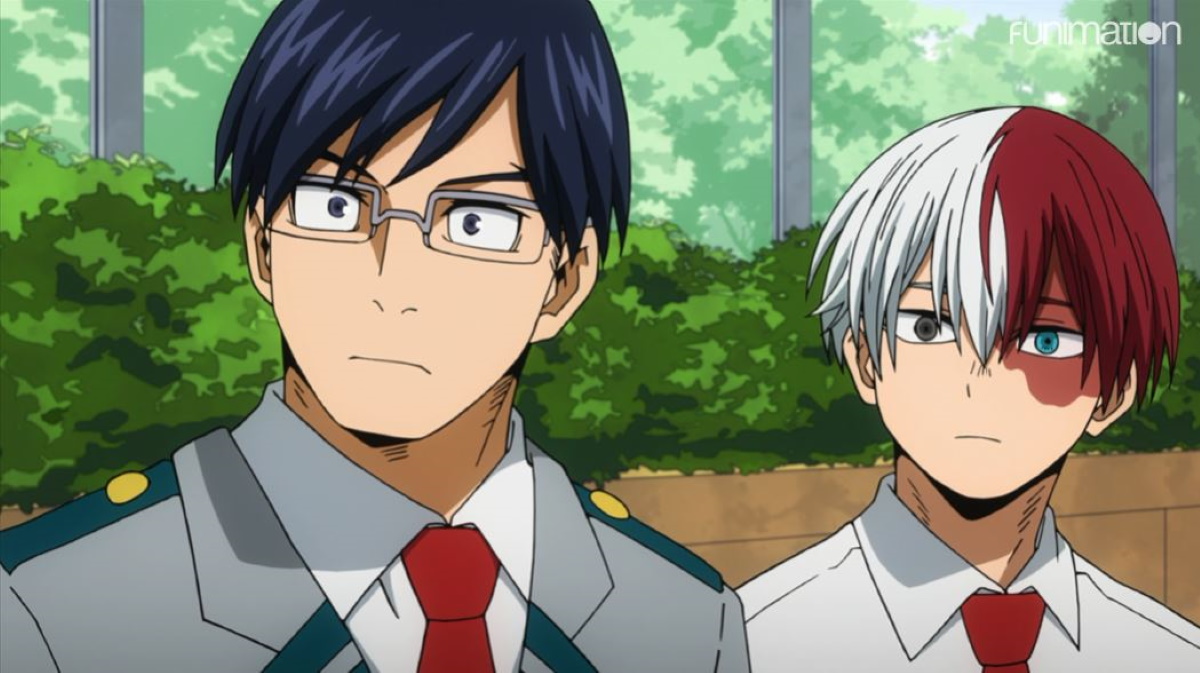 Even if Izuku can’t tell them about the situation at hand, they notice that he’s in a bad headspace and decide to help in any way they can. They don’t pressure him to tell them what’s going on, but they do let him know that they’re there if he wants to talk. This is especially poignant coming from Tenya who, in season 2, had his own mentally taxing situation in regards to his brother being severely injured by a villain. Tenya didn’t tell his friends what was bothering him, keeping his feelings to himself before rushing off to attempt to get revenge for his brother.

Izuku tries to keep his feelings in check, going so far as to say that heroes don’t cry. Of course, if you’ve been watching the series up to this point you know that Izuku is highly susceptible to crying because he’s been through a LOT. One of the first things that happened to this boy was having his idol tell him that he couldn’t be a hero, granted, All Might takes those words back, but hearing that you can’t achieve your dream because of something out of your control (being quirkless) HURTS, and then you cry again when you’re told, for the first time in your life, that you can become a hero.

From there, Izuku’s burst into tears over a lot of things, because he’s a child trying to make sense of suddenly having access to a quirk, that quirk literally breaking his body, and the huge legacy that quirk carries. Oh, and the main villain of the series has ties to the quirk so this once powerless teenager has to deal with THAT shit.

Still, during this lunch he’s having with his friends, Izuku tries to suck it up and not cry. Fortunately, Shoto quietly talks some sense into him, saying that heroes cry when they NEED to. 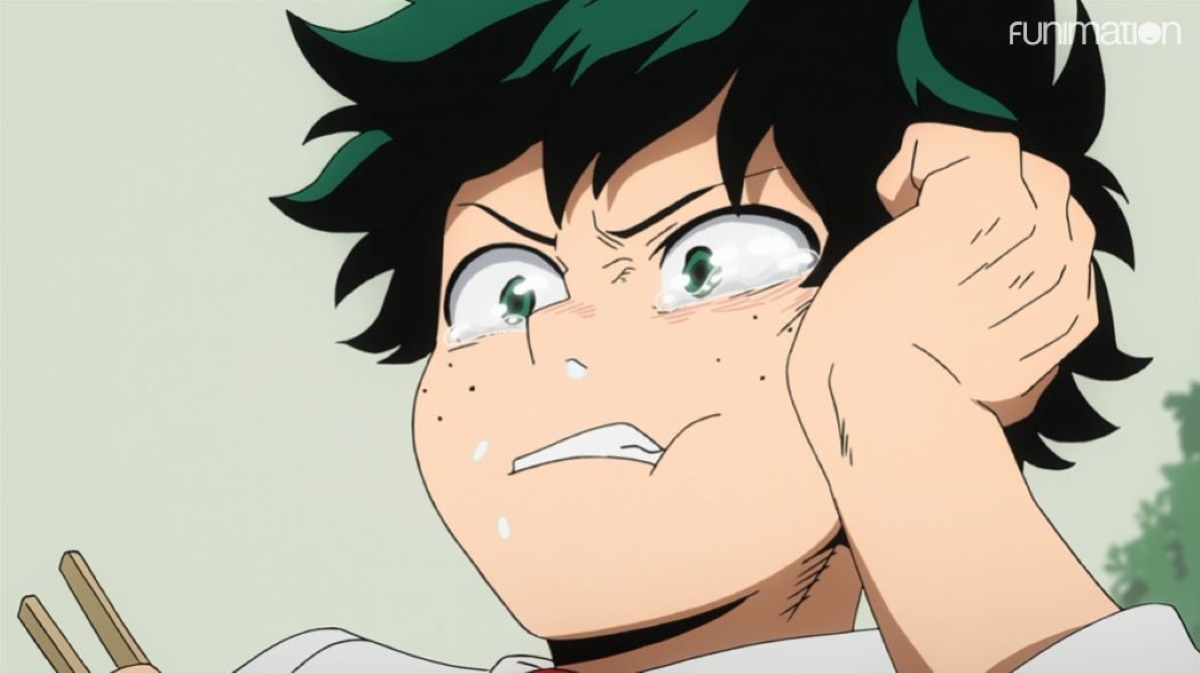 Don’t hold those feelings in. Let them out. You’ll feel better when you do.

After that, since Tenya and Shoto can’t get the full details on why their friend is in so much pain, they just … offer him food. Because that’s what your friends do when you’re upset, you know? Even if you can’t tell them the why behind it, they’ll come up with a way to cheer you up.

Shoto offers half of his soba, Tenya offers some of his beef stew, and Izuku accepts the food.

It’s just such a normal way to make someone feel better, and in a series with so many extraordinary moments where children are often tasked with doing the heavy lifting, it was refreshing to see such a simple interaction between friends.

This is a moment I often think about when things in my life feel too heavy to deal with—especially with the year we’ve had. In the toughest moments where I felt like I was suffocating, it was the simple things that brought me back. Having a good meal with my wife. Chatting with friends while we ran around each other’s islands in Animal Crossing. Interacting in the fandoms I liked by commenting on fanart or fic that I enjoyed. These were all things I’d do on a normal basis (like how Izuku typically has lunch with his friends at school), but since everything felt like it was on fire, these ordinary interactions truly did a world of good.

Sometimes, you don’t need a groundbreaking solution that’ll demand a lot out of you, sometimes, you just need some really good soba.

Congratulations on hitting 100 episodes, My Hero Academia! What are some of your favorite moments from the series?