What All Fantasy Leagues Should Be Like: Vampire Vs. Zombie, Zombie vs. Elf… 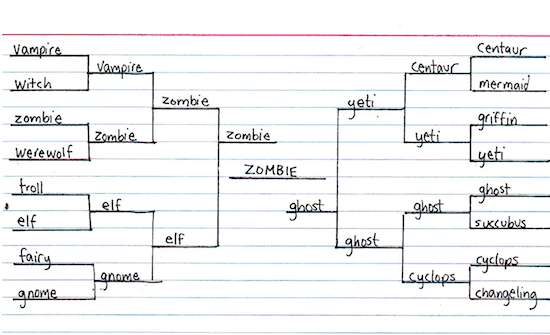 In a bracketology that’s bound to draw some controversy, Indexed cartoonist Jessica Hagy has pitted sixteen mythical creatures against each other, with Zombie coming out on top. We seriously think that yeti could take ghost any day, and we’re iffy on elf coming out on top in the anticipated elf-vs-gnome matchup; also, it really blew our bracket that Baba Yaga tore her hamstring right before the playoffs. Other than that, we’re good with it.

(Via Indexed with permission from author @jessicahagy)