Welcome to the Fan Parade: A Guide for Fandom Newcomers | The Mary Sue

Welcome to the Fan Parade: A Guide for Fandom Newcomers 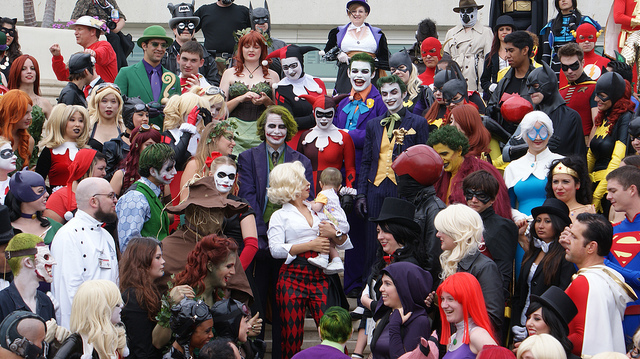 So, you want to interact with fandom. Maybe you’re a creator whose books are the latest rage. Maybe you’re an actor who had joined a long-running series and your Twitter following has quintupled overnight. Maybe you’re a journalist dipping your toe in to see what all the fuss is about. Or maybe you’re just a new fan exploring this world. Fans are amazing people, and their support can sustain a career, change lives and bring great joy, but navigating fandom as a newbie can be fraught with peril. Luckily, we’re here to help. It’s dangerous to go alone.

Fandom is a culture. This is the most important thing to keep in mind. When first interacting with fans, think of yourself as a visitor in a new land and treat us with the same respect and courtesy you would any culture that you’re just encountering. Fandom has its own norms, its own traditions and arts, and even its own language. Like any language, fandom slang is ever-evolving and varies by region, or in this case, social media platform. Things that make sense on Twitter might not fare so well on Tumblr. To communicate, you have to learn, and that takes time and a sense of humor. For instance: when you make a dumb joke, and someone tweets back “Dad,” it means we think you’re being adorable and dorky. When we say we’re garbage, it means we love something unashamedly. Using these terms yourself can be tricky at first, so tread carefully. If you’re an actor, tweeting about your garbage fans is probably not a good idea, but confessing that you yourself are “Buffy trash” will endear you.

We speak in hyperbole and sarcasm so thick it sometimes it devolves into a semi-Dadaist (or Dad-ist?) nonsense. But understand that usually when fans say something like, “I hate him and his stupid perfect face he’s ruined my life,” this is actually a compliment and it means we think you’re pretty. Just remember not to jump to conclusions about what we’re saying, and if you don’t understand, ask, and we’ll be happy to translate.

There are lots of specific terms that you’re going to come across in fandom, but perhaps the most prevalent and dangerous to the uninitiated is “shipping.” Shipping is a simple idea: it’s interest in the romantic relationship between two characters. Shipping is a big part of what we do in fandom, because it’s a big part of what everyone does when they enjoy stories. For instance: Mulder and Scully. Or Booth and Bones. Or Black Widow and Hulk (just kidding no one shipped that).

As a viewer, you were invested in their relationship as part of the story and thought they should get together. Simple—except when it’s not. Shippers get passionate, especially when a favorite character has more than one romantic prospect. From there, “ship wars” begin, and just like in a real wars, you can step on landmines if you express support for the wrong “team.” Don’t worry though, it’s mostly good fun, and as long as no one takes things too seriously, we’ll all get along fine. We ship people who have never met or aren’t even on the same show. We make up cute or silly names for pairings (SwanQueen! Spuffy! Destiel!). And we will ship everyone with anyone. And I mean anyone.

That brings us to the next aspect of fannish culture to be aware of: it’s really gay. Not all of it, of course, but lots of it. You may have heard the term “slash” around the interwebs. It still mainly refers to male/male ships and fanfic (that slash in the middle is where it got its name). Female pairings are called “femslash.” Slash has always been a part of fandom, and in fandoms for male dominated franchises and shows, it’s extremely prevalent.  Not only do we love queer ships, but fandom fosters queer and queer-positive spaces. It’s a progressive place in general where people find inspiration and support for marginalized identities, even if they’re not an intended part of the text.

In fandom, we make a (sometimes murky) distinction between canon: the actual text of a movie, show or book, and headcanon: the undefined bits of a story that we can add in our own heads. Our headcanons for characters you may think you know can range from favorite foods to sexualities to disability. A headcanon never hurt anyone, but they can help and inspire people. What that means is when we ship your character with someone of the same gender, or theorize that another might be autistic or trans, please don’t dismiss that as something gross or absurd. Though you may personally think it’s silly for someone to think your character might be bi or asexual, these are identities that are massively important to your fans and being cruel or callous about them is not just uncool, it can be truly hurtful. You may not agree with us, but that doesn’t mean what we see in a story isn’t valid. As long as you respect that we’re cool.

What goes for headcanons and ships in terms of respect also applies to fanworks—that’s the great stuff that fans make like fan art and fanfic. First off, we’re not stealing anything or destroying the integrity of the art. We love the worlds we’ve found and we’re just making them bigger. Fanworks are labors of love that deserve respect, not derision. To return to our earlier metaphor: you wouldn’t start a visit to a new country by walking in and making fun of their crafts. Similarly, treating fanworks like something gross or silly is a major dick move. Yes, some of it is ugly and a lot of it is erotic, but fan art and fanfic are made with passion and love, often by artists just learning their craft. Some of it may seem weird to you (pregnant men, tentacles, fauns, college AUs where no one has debt) but it’s not made for you. Fandom is something we do for ourselves and each other and it comes from love. Mostly.

Yes, there’s a caveat here. Every fandom has trolls—awful people who feel it’s their jobs to harass and belittle other fans, actors and creators. They’re the embarrassing cousins we wish we could kick out of the family, and on behalf of the 98% of fandom that are cool, nice people, I apologize. Realize that the hate may be loud and obnoxious, but it’s a small fraction compared to the joy and love in fandom. When you get hate, the best thing to do is ignore and block, or report it. Getting in fight with fans on social media isn’t good for anyone. Please don’t let a few bad apples make you think all fans are angry eggs that need to get a life.

Interacting with fandom, or even joining it, can mean walking a fine line. You’re entering a brave new world where you might be treated as a god or a feared like parents finding a diary, depending on the day. Fans are passionate and creative and that can be very scary for some people. But don’t knock it. Don’t dismiss fans by telling us “it’s just a show,” or to do something useful with our time. You wouldn’t say that about someone loving a sports team or someone who likes knitting or model railroad. We fans are here because we love something and love being part of this big, crazy family. We want to welcome you. Just remember to keep an open mind, be respectful and kind, and we will stay with you  till the end of the line…as long as you don’t get weird about all the porn.