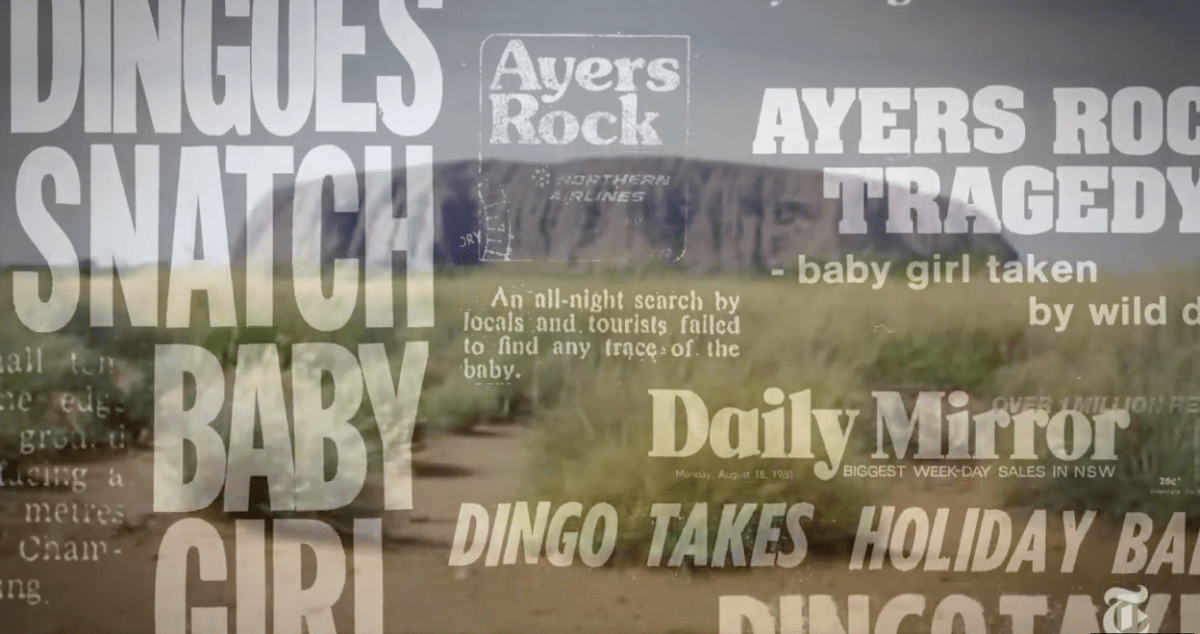 Fake News. It is a phrase that we use a lot now due to President Trump wielding it as a weapon against anyone in media who speaks against him. Yet, if there is anything good that can come out of the phrase, it should be employing it as a way to assess how the media has gotten a story wrong and the implications that meant for us as a culture.

Tomorrow is the anniversary of the Columbine shooting, and while I was working on going through the myths and misinformation that have surrounded that event, I was reminded of other news stories that warped the truth. As a true crime fan, I often find myself going down a rabbit hole of old cases, especially ones based on rumors and mythology. Here are three stories that should remind us all of the importance of doing our due diligence.

“A Dingo Ate My Baby”

I’d heard the phrase “a dingo ate [my/your] baby” for pretty much my whole life. I couldn’t tell you exactly where I heard it, but it was a part of my cultural language about something that sounded absurd. I had no idea what a dingo was and up until I learned the origin of the case, I assumed that is wasn’t real. Or something that was extinct, like a Dodo bird.

Then I heard about the death of Azaria Chamberlain. In 1982, two-month-old Azaria Chamberlain was taken from her family tent and killed by a dingo. A dingo is a wild dog native to Australia. Despite there being little evidence of foul play from her parents, Azaria’s mother Lindy Chamberlain was, however, trialed for murder and spent more than three years in prison.

It wasn’t until a piece of Azaria’s clothing was found near a dingo lair that new inquests were opened into exactly what happened to the infant. Slowly, it was shown that the prosecution’s case was based on bad science. Public opinion had turned the case so much that even once she was pardoned, Lindy Chamberlain had to deal with the stigma for years. Not to mention the traumatic death of her daughter being used as a comedic punchline for years to come.

The case is, sadly, another tragic reminder that everything a woman does is up for scrutiny in the media, even if she has done nothing wrong.

By now, most people show be aware of the ways this event has been warped by the media. Shows like “Adam Ruins Everything” and the HBO documentary Hot Coffee have both debunked the idea that this was a case of a woman just getting a bit of hot coffee spilled on her.

In 1992, Stella Liebeck spilled a cup of McDonald’s coffee onto her lap while she was sitting in the parking lot of the fast food restaurant. She was burned at over 16% of her body, and 6% of the burns were 3rd degree around her genital and leg regions. She was in the hospital for a week and accumulated hospital bills that amounted to $10,000. So Liebeck asked McDonald’s for that amount, and in the future to check the temperature of the coffee.

McDonald’s offered $800, which then led to the Liebeck family suing McDonald’s for the bill amount, despite trying twice to settle out of court. During the case, they showed that between 1983-1992, over 700 people claimed to have been burned by McDonald’s coffee being served too hot. It was shown that coffee heated to 180 degrees could cause severe burns; Liebeck’s coffee had been headed to 190 degrees. The photos of her burns are horrific and they will change any idea you may have about these burns being “no big deal.”

While Liebeck did win her case, and awarded 2.9 million dollars (but only received 650k), the media turned what happened to her into a story of a woman trying to get rich fast by suing McDonald’s rather than understanding that she was suing to get $10,000 for her medical bills and that it was McDonald’s that wanted to get one over.

As someone too young to have witnessed the birth and death of the Satanic Panic, the happenings of that period in the 80s had far-reaching effects.

In 1984, it was reported that a California preschool had engaged in the victimization of over a hundred children. The accusations started off with claims of sodomy to people at the daycare having sexual encounters with animals, child pornography, and other vile things. Only to eventually end seven years later with no evidence ever being shown that anything close to that happened.

So what the hell did happen? Well, it started when one mother accused Raymond McMartin Bucky of molesting her two-year-old son at McMartin Preschool. There was no evidence of this being the case, and the mother herself was unwell. While the police released Bucky because of the lack of evidence, they sent out letters to parents asking them to question their children about “sodomy, oral sex and fondling.” Now, as you can imagine not all parents are prepared to discuss these type of subject matter with their children and ended up asking leading and suggestive questions to these kids.

Children’s Institute International (CII), a Los Angeles abuse therapy clinic, interviewed the children. They released videos that showed children placing dolls in sexual positions to the public, despite the courts sealing the interviews. According to them, 90% of the 400 children had been molested. Transcripts of the interviews, however, show that the children deny that any “naked games” had taken place, but are repeatedly asked about the topic until they begin to give the answers the therapist wants.

No evidence of the crimes the children were coerced into accounting, from the molestation to the rituals, were ever discovered by the police. That means that there was zero proof of hundreds of children being molested, even though the accusations claimed there was child pornography.

Eventually, two people were brought to trial because of the accusations, Raymond McMartin Bucky and his mother, Virginia McMartin who ran the day care center. The trial lasted three years and came four years after the accusations first took place. That is seven years of this panic going on. In the end, the case cost $15 million, becoming the longest and most expensive criminal case in the history of the United States legal system, and brought zero convictions.

In 2005, one of the accusers, Kyle Zirpolo, spoke to author Debbie Nathan about his experience and said that he lied about what happened. “I don’t remember how many days or if it was just one day, but my memory tells me it was weeks, it seemed so long. It was an ordeal. I remember thinking to myself, ‘I’m not going to get out of here unless I tell them what they want to hear.'”

Now many in media admit that the way they went about covering the McMartin case was biased.