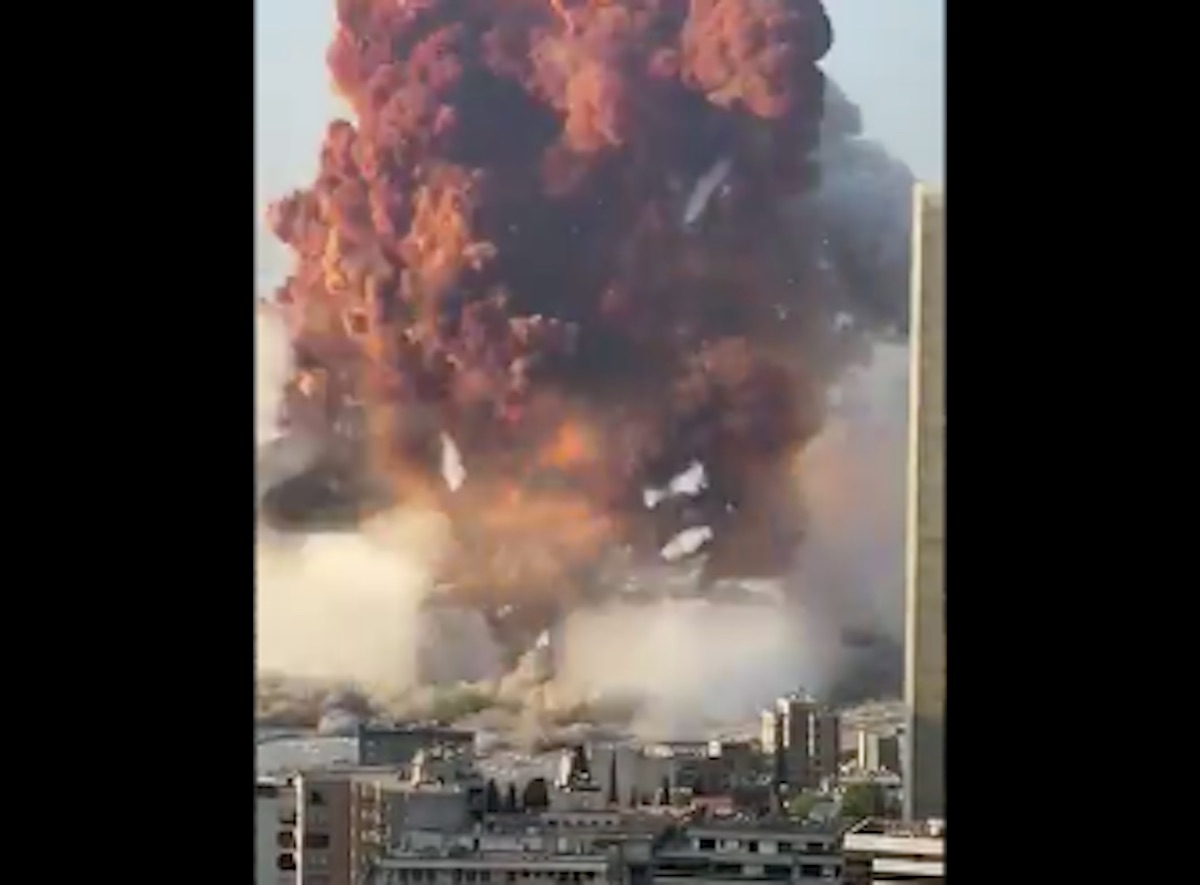 A huge explosion centered around the port in Beirut, Lebanon was caught by several on-camera, with the harrowing images spreading quickly on social media.

With cell phone cameras readily available, first-hand accounts of incidents can reach the internet in real-time. Such was the case with today’s enormous explosion in Lebanon’s capital city of Beirut. First, a huge fire and a great deal of smoke drew the attention of watchers who began recording the scene.

But a few seconds in, what seems to be a secondary explosion was so overwhelming that nearby buildings were damaged, glass was blown out of windows across the city, cars were overturned, and those recording the sight were affected themselves. It’s being reported that the shockwave from the blast was felt for miles—possibly as far away as Cyprus—and that the port area suffered an immense amount of destruction.

Absolutely horrifying explosion at Beirut port a short while ago. Small explosions followed by this enormous blast and shockwave. Unreal. Major devastation. pic.twitter.com/zjzI5nHEwd

#BREAKING – Extremely close up video of the #Beirut Port explosion shows the fireworks before the larger explosion in #Lebanon.

The health minister has called all hospitals to ‘immediately mobilize’. Several buildings were destroyed in the blast, people may be in the rubble. pic.twitter.com/OAQrjMhUgQ

There’s said to be many hurt in the blast, with Al Jazeera naming “hundreds injured,” and some hospitals overwhelmed. Unconfirmed videos on social media seem to show bodies amid the destruction.

A witness speaking to the BBC described a defeating explosion that caused hearing loss and shattered glass where they were, while other firsthand videos show the aftermath in various places around the city.

“I lost my hearing for a few seconds, I knew something was wrong and then suddenly the glass just shattered all over the car”

Eyewitness Hadi Nasrallah describes what he saw and heard as a large blast hit the Lebanese capital Beiruthttps://t.co/pBBTllBAcD pic.twitter.com/jOG1AnyFnl

The streets of #Beirut right now.

Early reports from state media said that the explosion originated in a fireworks warehouse, but this has not yet been confirmed, and a wide variety of rumors as to other potential causes have been racing around social media. Senior officials are now terming it “flammable materials” stored in the warehouse that ignited, backing away from the fireworks report.

The explosion comes at a particularly trying time for the Middle Eastern country. Lebanon has been suffering from a devastating economic crisis, and according to one witness from today’s events, many of the businesses, shops, and cafes near the port area we only recently reopened for business following lockdown measures. Years of internal conflicts and external wars have impacted the country, and some of the commercial areas damaged today in Beirut were key symbols of recovery. The BBC also reports that a UN tribunal is meant to deliver a verdict on Friday in the trial of four suspects accused of involvement in the car-bomb assassination of Lebanese prime minister Rafik Hariri in 2005.

Our thoughts are with the people of Lebanon as this story unfolds.