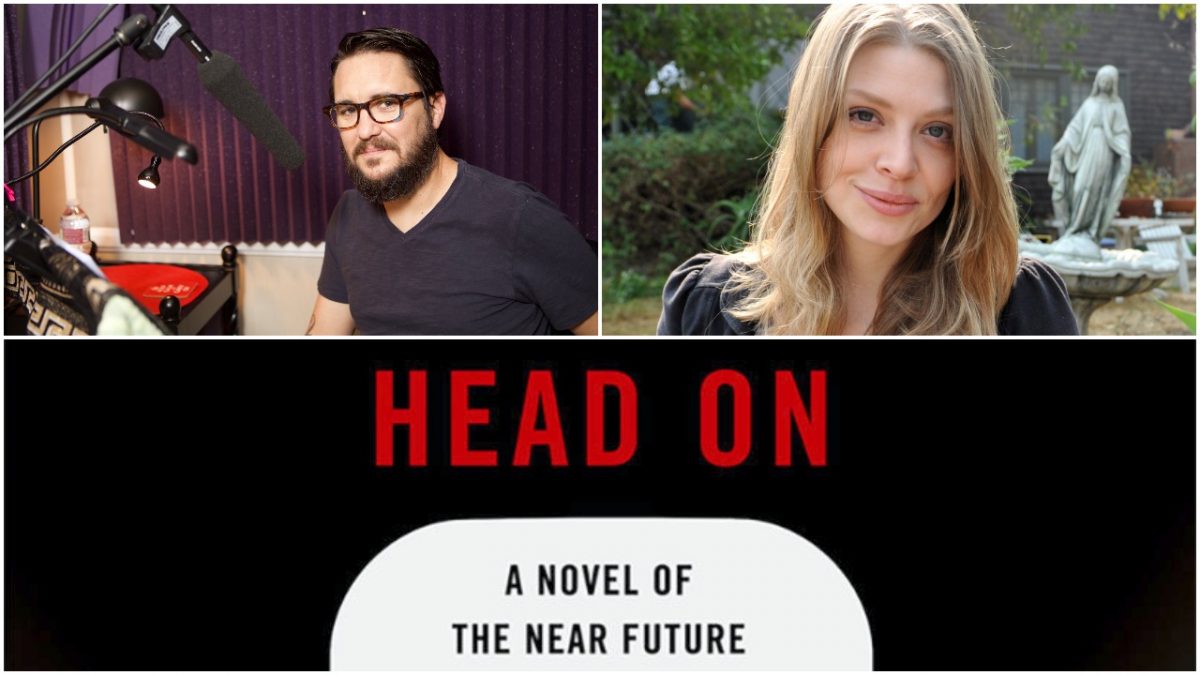 Get an earful of John Scalzi’s new book Head On, which hits shelves, e-readers, and your earbuds today.

John Scalzi is one of our favorite genre authors, and Wil Wheaton and Amber Benson are two of our favorite genre actors since middle school, so this is a match made in geek heaven. Head On is the sequel to Scalzi’s 2014 novel Lock In, which takes place in a not-so-distant future where those afflicted with a virus called Haden’s Syndrome—about 1% of the global population—are unable to control their physical bodies and thus occupy robot-like avatars. Here’s the nitty-gritty:

Chilling near-future SF with the thrills of a gritty cop procedural, Head On brings Scalzi’s trademark snappy dialogue and technological speculation to the future world of sports.

Hilketa is a frenetic and violent pastime where players attack each other with swords and hammers. The main goal of the game: obtain your opponent’s head and carry it through the goalposts. With flesh and bone bodies, a sport like this would be impossible. But all the players are “threeps,” robot-like bodies controlled by people with Haden’s Syndrome, so anything goes. No one gets hurt, but the brutality is real and the crowds love it. Until a star athlete drops dead on the playing field.

Enter Haden-related crime investigators Chris Shane and Leslie Vann. One of the things we especially love about these books is that Scalzi’s first-person protagonist, FBI Agent Chris Shane, does not have a specified gender identity. Chris, who has Hadens, can be visualized as the gender that we read them as, or as genderfluid or non-binary, which is an important step forward in the realm of science fiction heroes.

As such, as they did with Lock In’s audiobook, Wheaton and Benson both narrate separate versions of Head On—you can select which voice you want Chris Shane’s story read in. I like to think of this as “choose your own vocal adventure.”

And here’s Wheaton taking a crack at the same scene:

Scalzi’s input helped create the intriguing dual-narrator situation, and I asked him if he was involved in choosing fan favorites Wheaton and Benson to give Chris a voice:

I definitely suggested them! Back when Lock In first came out, I let Audible know that the main character of the book did not have a specified gender, and that I thought it would be a good idea to have a male and female narrator, in order to keep that aspect of Chris’s reality ambiguous as possible.

If you’re wondering whether Head On is for you, the critics are already weighing in with lots of enthusiastic thumbs up. Alex Brown over at Tor.com had this to say about Head On and the important sociopolitical topics that it tackles:

As good as Head On is, I absolutely loved how it picks apart socio-cultural responses to disability and gender both within the novel’s world and the reader’s. Race and gender are frequently explored in science fiction and fantasy, but disability not so much. Plenty of SFF characters have disabilities, but rarely does SFF discuss what it’s like to live with a disability in a world that won’t accommodate it, actively discourages it, or outright rejects it. Or, in the case of Head On, to be disabled in a world that does just enough to feel good about itself before finding a way to undo all its good work just to make some quick cash.

Head On is available for textual purchase today and the awesome audiobook you’ve sampled above is out at Audible. It will make your commute magical. It kept me calm in at least three different recent New York City subway snafus, which is a feat even more remarkable than widely broadcast robo-deathmatches.

If you’re not already doing so, you should follow Scalzi on Twitter, where he is consistently providing quality content to combat the Trump era. And stay tuned for more Scalzi this week on The Mary Sue, when I ask him all of the questions.