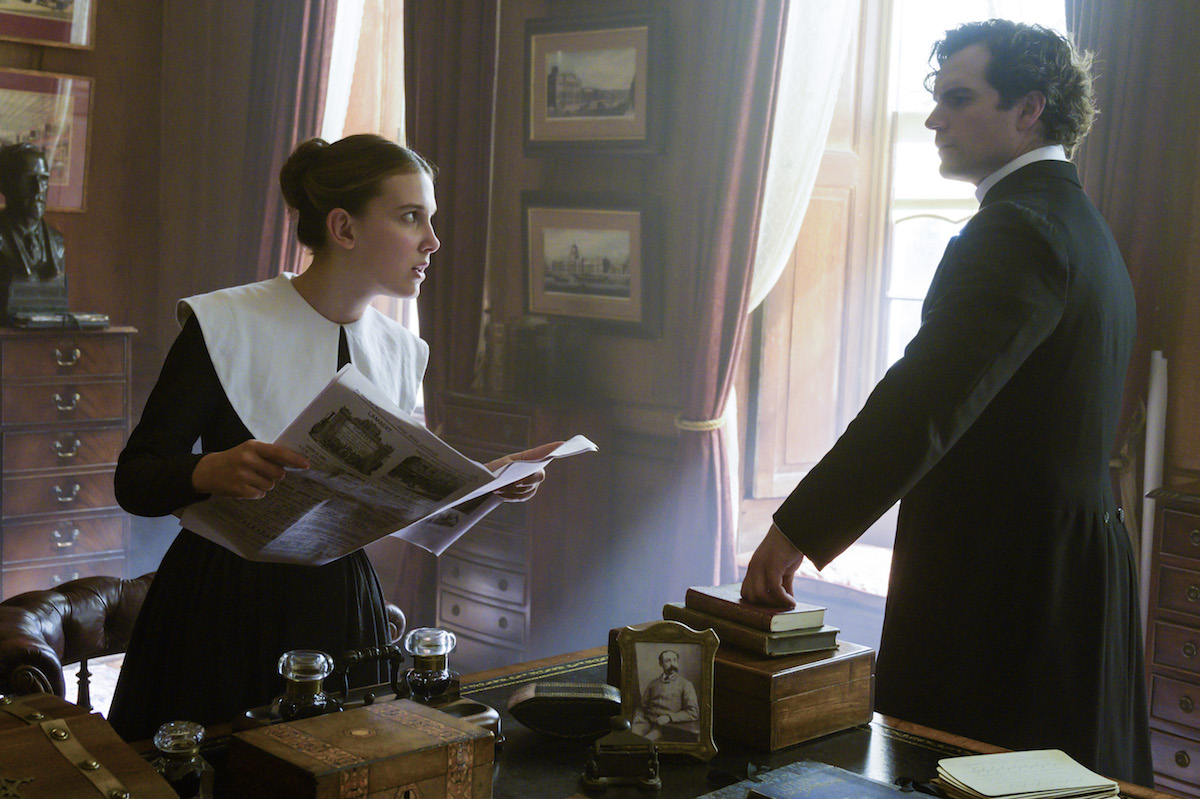 Enola Holmes, the upcoming Netflix movie starring Millie Bobby Brown as Sherlock Holmes’ little sister, is charming. It’s also quite unlike any Victorian-set production I’ve seen before, with a young woman not only as its central star but its action star. While the movie has its hands full trying to juggle a number of plotlines and characters, its winning cast and evocative production design keep us immersed in Enola’s world.

In the opening montage, we learn the story of 16-year-old Enola’s life to date. The youngest Holmes child, she was raised in seclusion by her eccentric mother Eudoria (Helena Bonham Carter, clearly having fun in a part that seems written for her). Eudoria is much concerned with the rights of women and dedicated to giving her daughter a decidedly unladylike education. From toddler years on, Enola is trained in fighting, science, ciphers, chess, and made to read every book in the house library. She emerges a bright, confident, spirited young woman who is full of knowledge and wit, but knows very little about the “real world” or how she’s expected to act due to her isolated upbringing.

Eudoria vanishes one day, leaving Enola with a series of puzzling clues—and leaving her alone. (There are several plays on how “Enola” backward spells “alone,” and this is a recurring theme for the independent-minded girl.) With Eudoria gone, Enola becomes the ward of her uptight older brother Mycroft (Sam Claflin, with a sinister mustache).

Her famous brother Sherlock (Henry Cavill, resplendent in a waistcoat) is also there, trying to balance his growing affection for the sister he barely knows with his usual mode of investigatory detachment. The conservative Mycroft wants to send Enola to a hateful ladies’ finishing school, but Enola has other plans. She has to find out what happened to her mother. So she runs away, disguised as a boy.

This is the first of many costume changes for Brown’s Enola, who wears varying outfits throughout the film to infiltrate different environments, and has a habit of offering men money for their clothes so that she can go incognito with a man’s freedom of movement. Enola Holmes has a lot of fun where dress is concerned, and the wonderful costumes, from costume designer Consolata Boyle, add to a cinematic Victorian England that is, as it was in truth, both lush and dingy. The film, which was directed by Harry Bradbeer (Killing Eve, Fleabag), has the production values of a major Hollywood release, with bustling London streets, towering ancestral estates, and an action sequence on a speeding train. 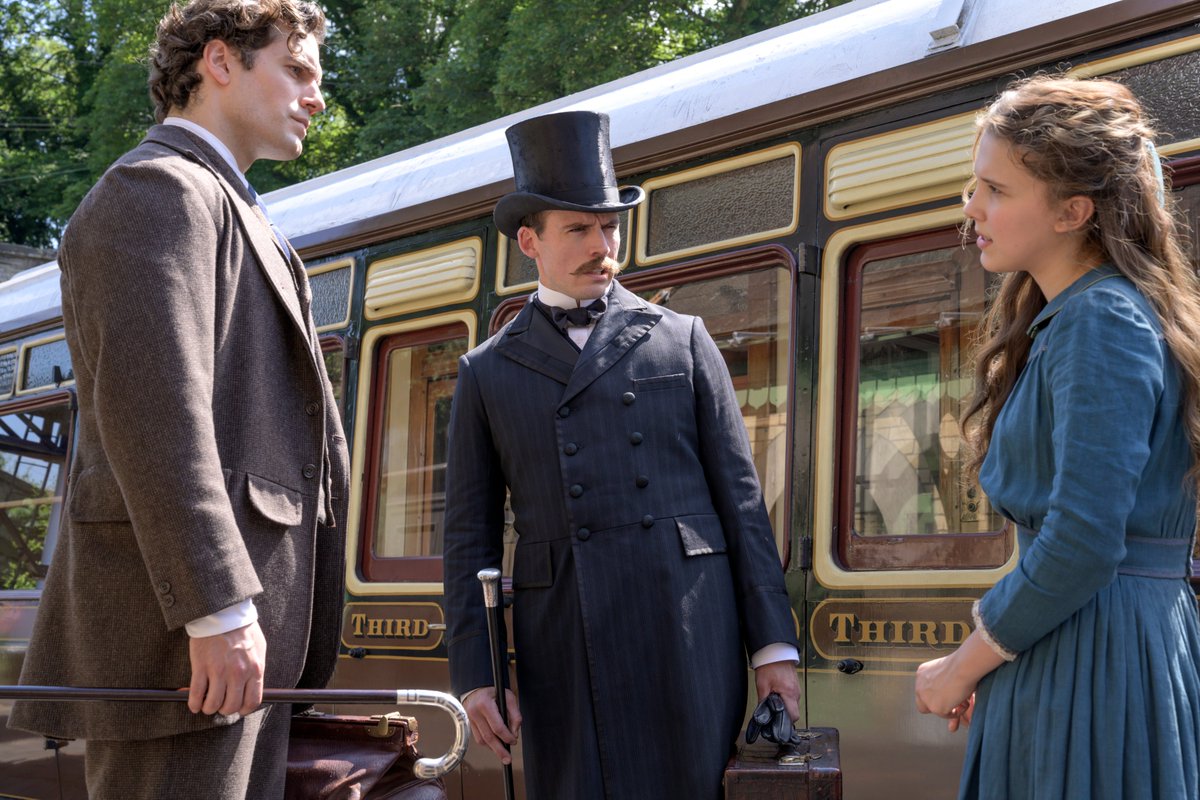 While the puzzle of Eudoria’s disappearance is the driving mechanism for Enola, this turns out not to be the “A-Plot” mystery for our super sleuth. Enola encounters the floppy-haired Marquess of Tewksbury (Louis Partridge, excellent as a sensitive teenage heartthrob), who is running away from his family on said speeding train. After rescuing him from the clutches of Burn Gorman (doing his best evil Burn Gorman), Enola must unravel why anyone would want Tewksbury dead, while the young man endears himself to her via his love of flowers and appreciation of her adventurous spirit.

There’s a lot going on in Enola Holmes, most of it resting squarely on Brown’s capable shoulders. The actress, who broke out in a big way in Stranger Things, commands the screen and is imminently watchable. Brown is also 16, giving Enola a truthful teenage air of both rebellion and confusion with one’s place in the world.

This is a girl who can street-fight a murderous henchman while wearing a corset, but also cries in despair when Mycroft (with help from Adeel Akhtar, as another literary Holmes character) catches her and sends her to a boarding school run by the redoubtable Fiona Shaw. Shaw’s Mrs. Harrison wants to make Enola a proper lady—that is, drain the life and free-thinking drive right out of her. Brown was also an executive producer on the project and instrumental in bringing it to the screen; it’s striking to consider the opportunities afforded to these two different young women divided by the span of a hundred-plus years.

There’s related social commentary throughout Enola Holmes that’s also significant to the plot. Eudoria appears to be in league with anarchistic women who want suffrage, while a “vote for change” in the House of Lords—that would give all men, and not just landowners, the right to vote—is important. The Victorian restrictions on the rights of women become a running theme, as Enola goes against the grain, defying societal expectations because she was never raised with any. But Enola also emerged from a unique vacuum, and she must learn to make her own way outside of home, where things aren’t often fair or just.

At one point, Susan Wokoma, as a friend of Eudoria’s who runs a combination revolutionary tea shop/ladies’ Jiu-Jitsu academy, takes Sherlock Holmes to task for his complacency. She points out that while the consulting detective is famously neutral about politics—and hasn’t helped his sister as much as he should—he can do so because the world at current is made for men like him. It’s easy to feel complacent when there’s nothing you have to rally for in order to be accepted and have influence. It’s a powerful moment, and Cavill’s Sherlock is rightly chastised. Enola Holmes’ inclusion of actors of color throughout the movie further demonstrates how preposterous and unacceptable all-white Victorian onscreen ensembles are. I hope to never see another.

Fans of Sherlock Holmes will likely enjoy a new spin on his universe, but make no mistake—this is Enola’s story, and Sherlock is a supporting character in it. Cavill’s soulful broodiness, put so well to use in his last star turn in The Witcher, works well in a more buttoned-up role. His Sherlock is a fair bit calmer and gentler than some depictions of the consulting detective, though there’s a slyness to his demeanor that shows us he’s in on the joke when his brother is acting ridiculous. (The Sir Arthur Conan Doyle Estate’s superfluous lawsuit against Enola Holmes makes even less sense after watching the movie.) Ironically, Cavill, who has made a career of playing warriors writ large, doesn’t have any action sequences in this. All of those are left to Sherlock’s little sister. 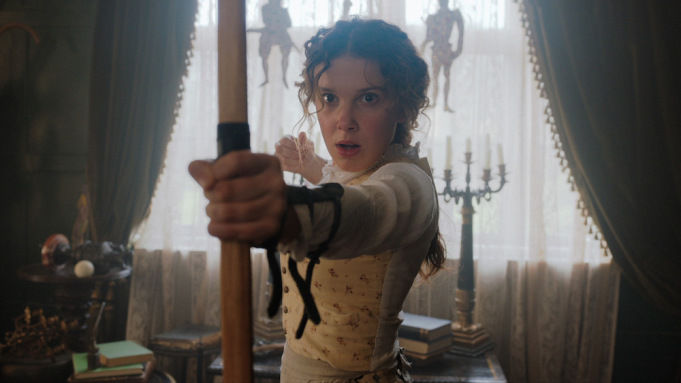 And there’s quite a bit of action in Enola Holmes. Enola’s fights with evil Burn Gorman make the movie a bit too violent for little kids, as do some of the convoluted political maneuvering at play here. But it’s exhilarating to see a young woman in the sort of period drama/action movie role that’s been almost exclusively male to date. Teenage girls may be the primary audience target, but the movie is akin to the sort of multilayered YA novel that adults can enjoy too. (Fitting, since the movie was based on the YA series by Nancy Springer.)

If Enola Holmes has any failings, it’s in that it has so many stories it wants to tell and interesting characters to follow that not everyone feels like they get their due, nor does every thread wrap up conclusively. I would’ve spent more time investigating the Tewksbury case, so that the eventual revelation hits even harder. As it was, I was still surprised by it, which is a nice feeling. As to whether Enola’s Fleabag-esque breaking of the fourth wall (which happens frequently) works is largely a matter of taste. I thought it added to our heroine’s charm, giving us a glimpse of what she’s really thinking.

Enola’s character is not a carbon copy of her brother. She’s skilled at solving mysteries and making deductions, but she’s far more feeling and rebellious than Sherlock Holmes. In Brown’s Enola, we’ve found the right consulting detective we need for our times. The movie seems set up for a sequel that I imagine will be forthcoming if it proves a hit for Netflix and the actors’ schedules allow. This could be the start of a new franchise for Netflix, and one that would be welcome.

The game is afoot when Enola Holmes hits Netflix on September 23rd, 2020.