EMTEC GEM Box Review: Video Game Streaming Box Might Be a Bit Ahead of Its Time 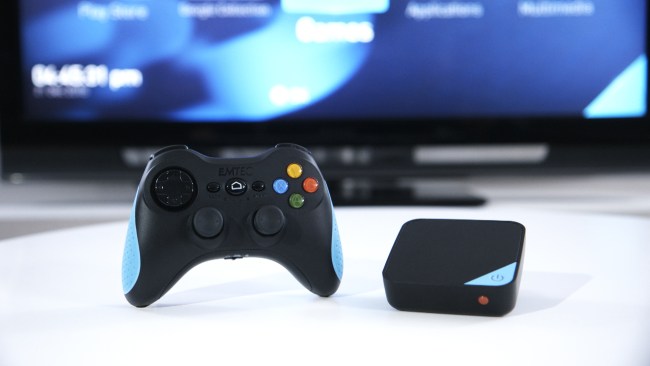 The EMTEC GEM (Gaming-Entertainment-Multimedia) Box, an Android-based video game streaming device for your TV, released today (found on Amazon and Target.com). I’ve had the chance to play around with one for a bit, and while it delivers well on its gaming features, I get the feeling that those features might be a bit too limited to make a dent in a fairly competitive market.

The GEM Box, unlike other streaming media solutions for your living room, focuses almost solely on gaming—to the exclusion of native compatibility with Android apps like Netflix or HBO Now. These apps require a different version of Android than the one on the GEM Box, though there is a workaround to get them installed that’s detailed on the box’s FAQ site. The GEM Box can, however, mirror other Android devices, play YouTube, and access your multimedia content on the Google Play store, so the non-gaming mileage you get out of it will depend on where you consume your media.

Its interface might also give less tech-savvy users a bit of trouble. It’s got an unusual text input system—one I actually prefer over others I’ve used in the past, but I could see it being cumbersome for users who have trouble getting used to it. Additionally, the included controller, which serves as the remote unless a separate one is purchased, has a “controller” mode and a “mouse” mode that can be toggled with a physical slider on the controller’s bottom. Getting the hang of which mode accomplishes which functions while navigating the Internet, file browser, Google Play store, and other menus can be confusing, though I’ve run into similar navigation hiccups with other Android TV devices.

All that would be forgiven if the device’s gaming capabilities were extensive enough to make up for anything else that’s lacking, but they fall short in a way that’s not necessarily the fault of EMTEC’s hardware. It comes with a controller in the box and can play Android games from the Google Play store, stream games from a PC (requirements on the FAQ page), and handle retro game emulation through the use of apps, but the biggest selling point of the Gem Box is the ability to use GameFly’s Netflix-like game streaming service, and it does that quite well. For a monthly fee, players can get packages of games streamed directly off of GameFly’s servers, meaning they get high-quality graphics without the need for an expensive gaming rig—the primary benefit that game streaming services tout in general, beyond cheap access to a library of games.

In my play time with the Gem Box, I noticed very little input delay, which is usually the tradeoff with such services, and I experienced no graphical issues or buffering whatsoever. It was as though I was playing the game from a high-end gaming PC right in my own home, which is exactly the experience they should be shooting for. This hasn’t been the case with every game streaming service I’ve tried, so I was pleasantly surprised, but that doesn’t mean everything was perfect. (I should also note that GameFly streaming on GEM Box requires an ethernet connection.)

GameFly streaming offers quite a variety of titles, but not a huge total number, and the selection still feels limited and not exactly fresh. (Full current list here.) Staples like the modern Tomb Raider, the original BioShock, and the Arkham games (which actually left the service shortly after I got my review unit) are there to put on a visual show, along with plenty of others, but it’s more like browsing a back-catalog than playing the latest and greatest for a monthly fee. That might be just fine for a lot of people and families who don’t always play the newest games, and the catalog is up to GameFly—not EMTEC—to improve, but the GEM Box’s appeal likely hinges on a how quickly that happens.

It is a budget solution, though, coming in at just $99. Nvidia’s gaming-oriented Shield TV starts at $199, and while the Amazon Fire TV comes in at $84.99, it doesn’t come with a controller (similar to the $149 Apple TV), making the GEM Box very competitive against the “Gaming Edition” Fire TV at $124.99. The Amazon Fire TV Stick undercuts it in price, but it also lacks a controller and has less internal storage than the GEM (8GB vs. 16GB). The “Netflix of gaming” idea is a great one, and it’s one I can’t wait to see take hold in the realm of streaming, but a device that relies so heavily on it seems a bit too early to market, despite how well the hardware performs.