Just before they sort Hamilton and Burr into houses. Because MAGIC IS REAL. 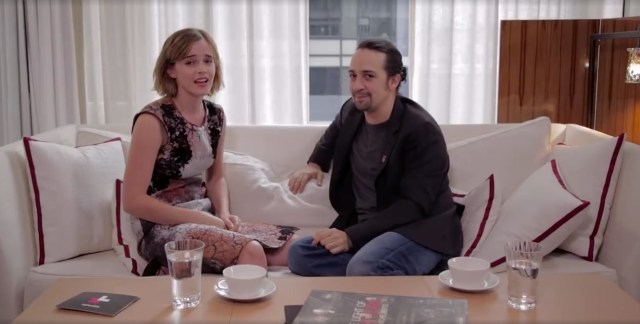 In an awesome video interview for the UN Women’s campaign HeForShe, Emma Watson talks to Lin-Manuel Miranda about feminism…by beatboxing to his freestyle verse!

Emma Watson, Drop The BeatAnd here’s a SHORT clip of Emma Watson beatboxing while I freestyle about #HeForShe, if you only have 3 minutes. This was so fun.

The thing that really makes these two the cinnamon roll-iest is that they, very seriously, had a conversation about sorting the characters in Hamilton into Hogwarts houses. In true Hermione fashion, Watson came very prepared.

Also, I hate to disagree with Hermione…but Hamilton is totally Slytherin, at least personality-wise.  Slytherin is about all about ambition, and Hamilton has that in spades. Then again…he might not be pure-blood enough for Slytherin on any level.

I’ll leave that debate up to the rest of you!

(via Nerdist, image via screencap)