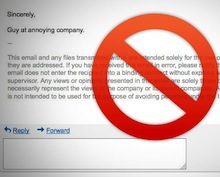 Anyone who has gotten any volume of email from corporate sources has probably encountered a range of severe and important-sounding disclaimers in email signatures, ranging from those that tell the reader not to act on the email if it was received in error to those saying that its contents are off the record to those saying that the email is not legal or professional advice.

A British government website provides the following template, some variation of which you may well have come across: “This email and any attachments to it may be confidential and are intended solely for the use of the individual to whom it is addressed. Any views or opinions expressed are solely those of the author and do not necessarily represent those of [business name]. If you are not the intended recipient of this email, you must neither take any action based upon its contents, nor copy or show it to anyone. Please contact the sender if you believe you have received this email in error.”

Obviously, this sort of disclaimer is meant to impose an agreement or understanding upon the reader, and it may well be successful in this by virtue of looking so official. But how much legal meaning does it have, really? According to The Economist, not much.

[Email disclaimers] are assumed to be a wise precaution. But they are mostly, legally speaking, pointless. Lawyers and experts on internet policy say no court case has ever turned on the presence or absence of such an automatic e-mail footer in America, the most litigious of rich countries.

Many disclaimers are, in effect, seeking to impose a contractual obligation unilaterally, and thus are probably unenforceable. [emphasis added] This is clear in Europe, where a directive from the European Commission tells the courts to strike out any unreasonable contractual obligation on a consumer if he has not freely negotiated it. And a footer stating that nothing in the e-mail should be used to break the law would be of no protection to a lawyer or financial adviser sending a message that did suggest something illegal.

For a great illustration of this, check out this 2007 Jack Shafer column in which he and his attorney go through a 114-word Time Inc. email legal disclaimer and basically tear it to shreds.

If so many email legal disclaimers are useless or miswritten, why, then, do they proliferate? The Economist speculates that there’s some me-tooism at work: Companies see that other companies have them and cajole their legal departments into drafting up something similar, even if it’s not legally enforceable.

If the cudgel-like email signature disclaimers like the one quoted above that try to force recipients — including accidental recipients! — to comply don’t hold water, can a disclaimer ever serve a purpose? An old Ask MeFi thread zeroes in on one occasion on which they could actually be useful: If they ‘remind’ the recipient of a fact, for instance, that the email does not constitute professional advice. This line sums it up for these cases: “It is important, I think, to distinguish between a disclaimer being a legally enforceable contract document and a disclaimer having a desired effect in a subsequent legal proceeding.”

(via Economist. pic via Lifehacker)