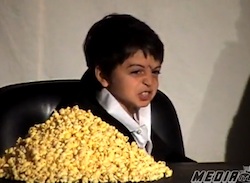 Yesterday a video emerged on the Internet that had the perfect elements for a viral sensation: the last scene in an apparent grade-school production of Brian DePalma‘s Scarface. Instead of cocaine, lil’ Tony Montana had a mountain of popcorn. Instead of swearing, the tiny Michelle Pfieffer in a blond wig screamed “Fudge you, Tony!” At the end, an audience of proud parents clapped. As some outraged individuals pointed out, we’ve heard of putting your kids on a theater track early, but a tiny tots Scarface was more ridiculous than Rushmore‘s high-school production of Serpico. And, as it turned out, just as movie-magic fabricated.

This video was created using professional child actors and directed by music video veteran Marc Klasfeld, trying hard to earn his Spike Jonze street cred. Klasfeld talked to the L.A. Times about the Internet outrage on this video, saying that the real issue “all these unnecessary sexual [messages]” and violence that’s already marketed to kids. Some parents may have felt that this video exploited children, but were these kids exposed to anything more egregious than they could see in a Lady Gaga video (which Klasfeld’s company ironically produces)? It’s not like Klasfeld had them watch the original Scarface for reference…right?