New Dwarf Planet Candidate Discovered, So Pluto Might Be a Little Less Lonely

We're so close to a Snow White and the Seven Dwarf Planets joke. So close. 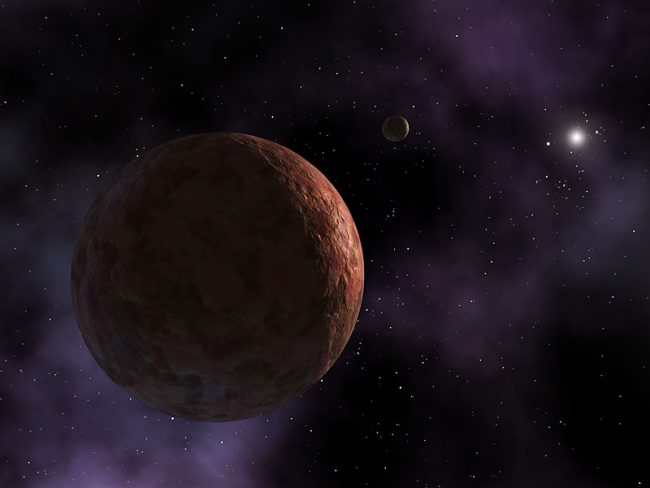 Artist’s rendering of dwarf planet Sedna, which is said to be similar to UZ224.

A new dwarf planet candidate just had its existence confirmed by scientists after two years of research.

Technically, the new dwarf planet candidate (named 2014 UZ224) was discovered–you guessed it–two years ago in 2014. In the intervening two years, scientists have been working to confirm that it actually exists. Knowing this, I wonder, sometimes, how many anomalies and discoveries go unreported simply because there’s just not enough evidence to support its existence? Like, have we dismissed discoveries that have ~99% of whatever criteria but they don’t get announced or shared because of that 1%? Hmm.

Anyway, this new dwarf planet candidate is only 330 miles across. The smallest actually-classified dwarf planet, Ceres, boasts a 590 mile diameter. Because of its diminutive size, David Gerder, who led the University of Michigan-based team that discovered UZ224, thinks that other astronomers will argue it’s too small to be considered a dwarf planet. They can agree or disagree all they like, it’ll be up to the International Astronomical Union to decide how to classify this discovery from Gerder and his team.

Whichever way this goes, Gerder and his team are already setting their sights–and the Dark Energy Camera they used to discover UZ224–to try to find where Neptune-sized Planet Nine might be hiding up in that big, gigantic, ever-expanding, ever-growing sky.

(via Engadget, image via NASA)