The ousted BARDA chief called out Trump on his incompetent pandemic response. 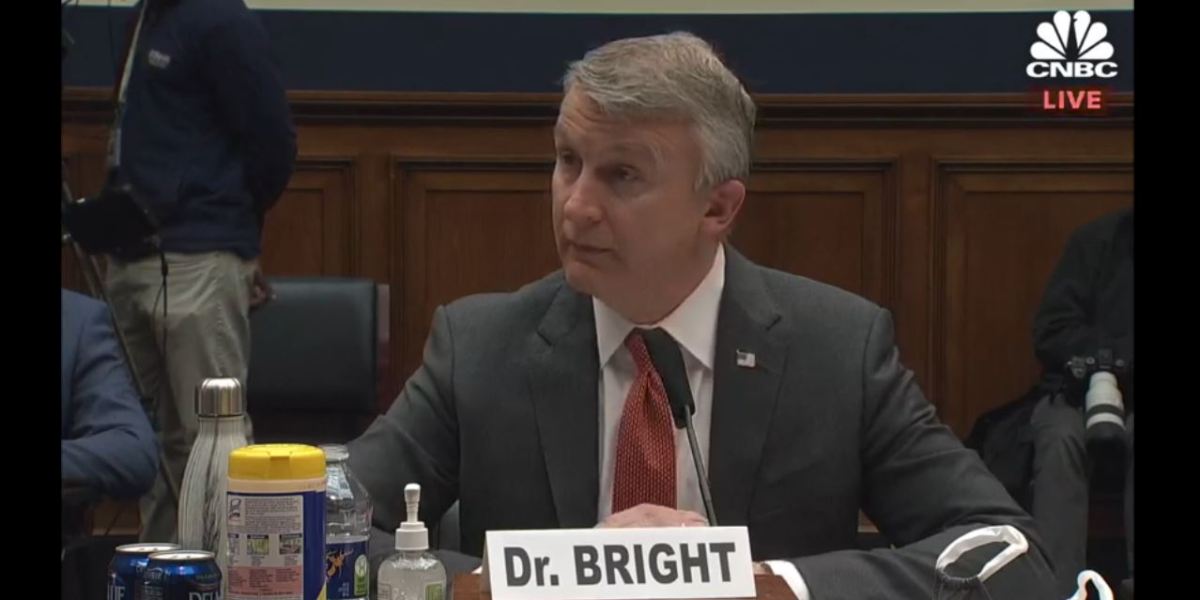 Whistleblower Dr. Rick Bright testified before the House Energy and Commerce Subcommittee on Health today, to warn Congress of the Trump administration’s incompetence regarding their response (or lack thereof) to the coronavirus pandemic. Bright was removed from his post last month as acting director of the Biomedical Advanced Research and Development Authority (BARDA), a division of the Department of Health and Human Services that works on developing vaccines and other drugs.

Bright was demoted following repeated requests to replenish the government’s stockpile of PPE, which went ignored by his superiors like HHS head Alex Azar. Bright also objected to using hydroxychloroquine and other untested drugs to treat COVID-19, which were later found to be ineffective.

Of the government’s response so far, Bright said, “I believe we could have done better … I believe there were critical steps we did not take in time.” Bright also discussed the lack of PPE and masks, as well as the government’s refusal to rise to the occasion. “We knew going into this pandemic that critical medical equipment would be in short supply. I began getting alerts from industry colleagues in mid- and late January telling me that, from an outside view, the supply chain was diminishing rapidly, telling me that other countries that we relied on to supply many of these masks were blocking exports and stopping transfer of these masks to the United States.”

Dr Rick Bright: “Without better planning, 2020 could be the darkest winter in modern history … we have the world’s greatest scientists. Let us lead. Let us speak without fear of retribution … we need a national testing strategy.” pic.twitter.com/63UiCK3QQc

Bright also discussed emails he received from Mike Bowen, who runs Prestige Ameritech, a Texas-based PPE manufacturer. Bowen reached out to the federal government, telling them he could manufacture 1.7 million N95 masks per week in January. They turned him down.

Bright advocated for Bowen’s offer: “I pushed that forward to the highest levels I could in HHS, … and got no response.” He also recounted an email he received from Bowen which read, “We’re in deep shit. The world is. And we need to act.”

Dr. Bright discussed the federal government’s incompetent response to the pandemic, while warning Congress that cases could spike in the winter, when influenza season hits. He also urged Congress to take more aggressive action in fighting the pandemic, saying “time is running out.” He added, “Our window of opportunity is closing,” and “Without better planning, 2020 could be the darkest winter in modern history.”

The Trump administration ignored warnings from Dr. Rick Bright, the country’s top vaccine scientist, and then fired him after he wouldn’t go along with the President’s reckless push of a miracle cure for COVID-19. The Senate needs to hear from Dr. Bright. https://t.co/GaYKJ6AFiy pic.twitter.com/Fy3qX3QSbS

California Rep. and chairwoman Anna Eshoo called Bright “the right person, with the right judgment, at the right time,” and called out the vindictive Trump administration, saying “We can’t have a system where the government fires those who get it right and reward those who get it completely wrong.”

Republicans however, claimed that the hearing was designed to undermine the Trump administration, and Trump himself tweeted that Bright was a “disgruntled employee”.

They haven’t returned to the hearing, instead they are currently having a segment on “bringing baseball back” pic.twitter.com/LlFyuZYf4p