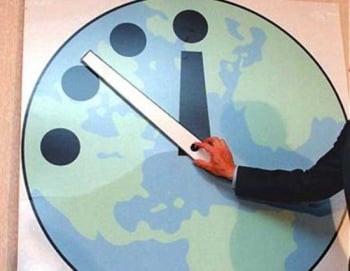 After being moved to 11:54 two years ago, the Doomsday Clock is now back to ticking down and has gone to 11:55, a mere 5 minutes until armageddon, metaphorically at least. Admittedly, the Doomsday Clock isn’t a conventional clock in any sense of the word. Instead, it’s a meter by which scientists, specifically the Bulletin of Atomic Scientists, can contextualize the intensity of their ever-present feeling that the world is ending. Right now, they’re feeling pretty pessimistic.

Of course, to get a feel for what this 11:55 setting really means, you need a little historical context. The Doomsday Clock was made in 1947 in acknowledgement of the horrific world-ending potential of nuclear weapons. Since then, it’s had a variety of settings, the vast majority of which are after “quarter to midnight.” The all-time high for optimisim, as far as the Doomsday Clock is concerned, was 1991, when it was set to 17 minutes following the dissolution of the Soviet Union. Most of the time however, it has hovered much closer to midnight. It was originally set at 7 minutes, but quickly fell to its all time low, 2 minutes, after nuclear tests by the United States and the Soviet Union.

More recently, we’ve been hovering around the 5 minute mark. Since 2007, specifically. The election of Barrack Obama set the clock back 1 minute, but now, this most recent forward tick brings us back to the 11:55 time established 5 years ago, the lowest the clock has been since the Cold War. Between the continuing dependence on fossil fuels, the lack of widely adapted advances in green technology, and the proliferation and creation of nuclear weapons, scientists don’t seem too hopeful for the future, and it’s hard to blame them. Is there any hope? Maybe. Is there any time? Maybe not.

(via The Escapist, graph via Wikipedia)

Sorry to be such a downer, but here’s some more depressing stuff