Don’t Cry for Tomi Lahren, Who Is Reportedly Banned From Her Show Forever 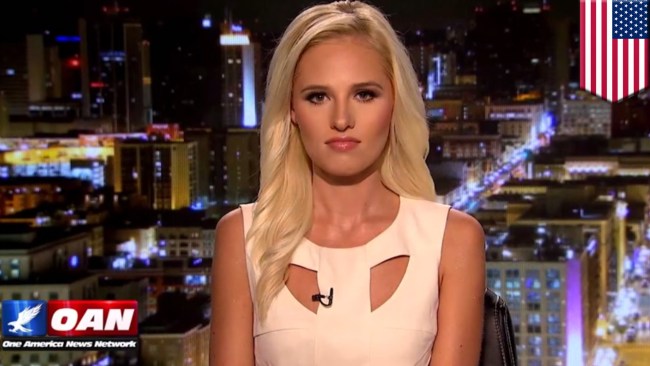 We covered vicious conservative attack dog Tomi Lahren’s suspension from her show on TheBlaze, and now our sister site Mediaite is reporting that insiders say Lahren has been barred for good. Good.

I don’t want to give Tomi Lahren any more attention or textual inches than she deserves, which is zero. So I’ll try to keep this brief. Do not mourn for Tomi Lahren. Do not give her another passing thought, except one of delicious schadenfreude or, if you prefer, what-goes-around-comes-around karmic justice.

Lahren, a hatemonger who built her career on smearing all manner of liberal thought as weak and un-American, has recently had to face her own music. Much reporting around what went down misconstrues the events, depicting Tomi as suffering because she professed pro-choice values on The View and was promptly dumped by her conservative fans.

(image: TheBlaze. Welcome to the world you helped create, Tomi.)

While the backlash from fans is true to some extent, it’s not why she’s in hot water with her bosses. Quasi-reformed hateful talking head Glenn Beck, who founded TheBlaze network, claims that he suspended—and now possibly fired—Lahren not because of her pro-choice views but because she was being hypocritical in her assertions.

Lahren’s stance on The View was that conservatives must be pro-choice if they agree the government should be hands-off in other all other aspects (I agree with her about being pro-choice and about precisely nothing else). Beck, who has come out as anti-Trump, thinks that it’s ridiculous that Lahren could insist on holding “libertarian” views while supporting the rest of the Trump administration’s agenda. (Not to mention that she’s ranted and raved about abortion as murder before, when it suited her ends. But Beck never minded that.)

Wait, libertarian views? Help me out on Trumpcare, stimulus, and executive orders. Trump is anything but libertarian. #intellectualhonesty https://t.co/jlt5sFvQMP

Nothing would bring me greater joy than to see Tomi Lahren deprived of her platform to spread fear and anger. But let’s be real, this is America, and anyone who can make someone else money is going to get another chance (unless they suffer a Milo-like fall from grace). I’m sure this isn’t the last we’ll see of her. And Lahren is all of 24, which is maybe why she’s struggling to figure out her way in the world as of late.

“Dear God, if today I lose my hope please remind me that your plans are bigger than my dream.”

In the meantime, let’s relish that the very people who have spent the last few years screaming that the left just can’t handle dissenting opinions have proven who the real fragile “snowflakes” are. And let us shed no tears for Tomi.

(image: TheBlaze. Don’t let the door hit you on the way out.)