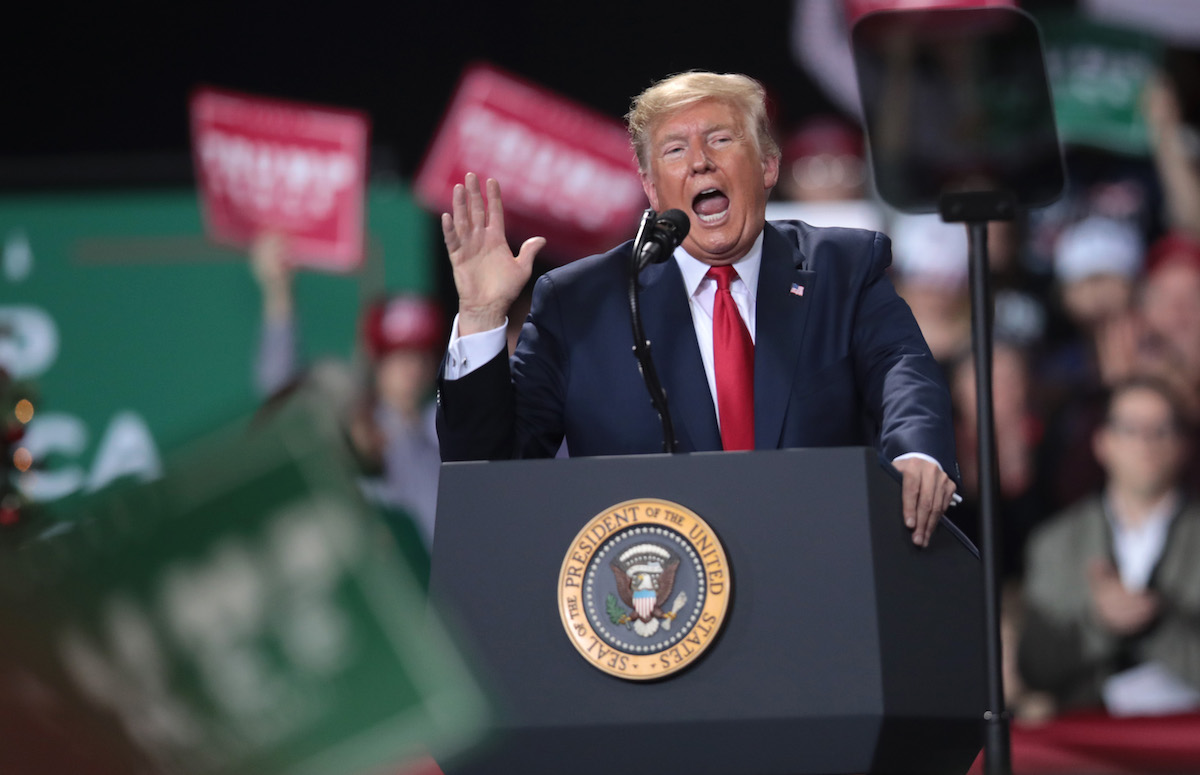 Just after the House voted to impeach him Wednesday evening, Donald Trump headed to a rally in Battle Creek, Michigan where things got pretty weird. In addition to rambling about showers with no water and dishwashers that go “boom,” he also continued his attacks on the state’s own Rep. Debbie Dingell.

Crowd stares in silence as Trump explains lack of water in showers and dish washers. pic.twitter.com/RB3aI635Lj

Dingell is the widow of John Dingell, who was the longest-serving U.S. Congressman at the time of his retirement in 2015. He died in February of this year and at the time, Trump tweeted out some nice if perfunctory and kind of weird (also definitely written by someone else) condolences.

Deepest sympathies to Congresswoman Debbie Dingell and the entire family of John Dingell. Longest serving Congressman in Country’s history which, if people understand politics, means he was very smart. A great reputation and highly respected man.

This week, though, Trump has been lashing out at Debbie Dingell for supporting impeachment, and he’s been doing so in the grossest, most callous (aka the most predictably Trumpian) way–by centering those attacks on her late husband.

Here’s what he tweeted last weekend:

The last time I spoke to Debbie Dingell was her call thanking me for granting top memorial and funeral service honors for her then just departed husband, long time Congressman John Dingell. Now I watch her ripping me as part of the Democrats Impeachment Hoax. Really pathetic!

Basically, Trump is saying that because he allowed the country’s longest-serving congressman to have what he later described as an “A+” funeral, and because they once spoke on the phone about it, she’s not supposed to support his impeachment. That’s … a really weird way to frame it.

At his Michigan rally, Trump went even further with his attacks on both Dingells.

The joke was reportedly met with a mixed reaction–some laughs, some boos and groans because Trump really does not know how to read a room. The Battle Creek crowd booed when Trump first mentioned the current Congresswoman’s name but the Dingell family, and John especially, is a Michigan legend. The late Congressman served for 60 years in the seat previously occupied by his father, who served for 22 years before him. With Debbie taking that seat (which, again, she did after his retirement and before his death, making her the first non-widowed woman in Congress to ever succeed her husband), the Dingell family has represented their district for 86 consecutive years. Trump shouldn’t be attacking anyone like this, but this man and this family are especially unwise choices of targets in this setting.

Nancy Pelosi put it well when she said at her press conference Thursday, “What the president misunderstands is that cruelty is not wit. Just because he gets a laugh for saying the cruel things that he says doesn’t mean he’s funny. It’s not funny at all. It’s very sad.”

A number of Republican lawmakers from Michigan have called on Trump to apologize.

I’ve always looked up to John Dingell – my good friend and a great Michigan legend. There was no need to ‘dis’ him in a crass political way. Most unfortunate and an apology is due.

John Dingell was a well-respected man & I consider Debbie a close colleague and friend. To use his name in such a dishonorable manner at last night’s rally is unacceptable from anyone, let alone the President of the United States. An apology is due, Mr. President @realDonaldTrump

Mr. President, let’s set politics aside. My husband earned all his accolades after a lifetime of service. I’m preparing for the first holiday season without the man I love. You brought me down in a way you can never imagine and your hurtful words just made my healing much harder.

By the way, before his death, John Dingell was no fan of Trump’s–a fact he did not try to hide in the slightest.

On behalf of so many of my fellow veterans:

Sit on it, you imbecile. https://t.co/R4jOyjxsqv

As for Trump, an apology isn’t likely to come. His press secretary Stephanie Grisham has defended his behavior, calling Trump a “counter-puncher.”

“The president is a counter-puncher,” @PressSec tells @GStephanopoulos when asked about Trump’s comments about the late Rep. John Dingell last night and said he was “riffing” off the crowd. https://t.co/42dLkc3XOx pic.twitter.com/FCXbcbY0r6

So a sitting Congressional lawmaker chooses to support the Democratic and constitutional process of impeachment and Trump tells a few thousand people that her recently-deceased, much-beloved husband is in Hell. If we’re talking “punches,” it doesn’t seem like these two are in the same sort of fight. This isn’t bringing a gun to a knife fight, it’s like bringing a pee-filled water balloon to a debate tournament. It’s cruel and childish and just doesn’t make any sense.

I just received some tough family health news tonight, so perhaps seeing the ghoulish insult that Trump directed at the Dingell family is hitting me in a special way. But do not just say, “This is how he is.” Never accept cruelty, especially from a @POTUS. https://t.co/WleyS5KbEh