Don’t Let the Muggles Get You Down: A LeakyCon Story

At the Harry Potter Leavesden Studio Tour in Watford, UK there is a massive model of Hogwarts Castle built for exterior shots. Measuring fifty feet across, it sits in an artificial day-night cycle and if you squint you can almost pretend you’re looking at it from a distant hill, not a health-and-safety approved walkway. But that’s not the best part. The best part is watching other visitors as they round the corner and first clap eyes on the structure. I’ve seen children look more excited than the N64 kids. I’ve seen middle aged women flail and twentysomething dude bros mist up. And, almost without fail, they all stop in their tracks for a split second, utterly dumbfounded. This is a moment not unlike the pinnacle of a roller coaster, except that it’s not gravity being suspended, but reality –  you can see it on their faces, the kind of tetherless contentment I imagine a freshly obliviated person might sport.

While I now know that you haven’t truly lived until you’ve roared “Gotta Get Back to Hogwarts” in a crowd of a thousand fans, it’s the panels and discussions that set me afloat. The majority of attendees at LeakyCon were young women the other side of twenty, and to me they roamed the hamster maze hallways of the Grand Connaught Rooms in Holborn like ghosts of geek girl past. Clad in their Quidditch jumpers and house robes, they came into a sense of agency and assertiveness that created atmosphere in ways I hadn’t anticipated. A fan of thirteen years myself, I’d been ready for the escapism, empathy, and fervent spirit of “Love wins” that is inherent to Harry Potter as a story and its fandom as a community. What bowled me over was the the degree to which young witches and wizards are politicised against sexism.

A fanfic meet-up on my first night turned into a three-hour group conversation on why women easily empathise and identify with male characters (they’re the majority of what we’re presented with in popular culture) and the worrying implications of the erasure of female characters in fanfic. These issues were later addressed officially and in detail at the Heteronormativity in Canon vs. Slash in Fanfic roundtable, where head of discussion Krista Domin summarised that one reason behind the proclivity towards smut in fanfic might well be that many fanfic writers and readers are young women, who are commonly shamed for having sexual desires rather than being the object of them. For these young women, fanfic community provides an externally unexamined space to explore their desires. Consenting murmur and a round of applause across a room packed to capacity backed this up. Elsewhere, the old nugget of brooms as phallic symbols used alongside an unfortunate choice of words about Ginny Weasley “not acting like a woman” by playing Quidditch met instant and eloquent backlash. Then the room segued into a defence of Molly Weasley’s life choices, and finished off with a beady side-eye at the vilification of Fleur Delacour in Half-Blood-Prince. ALL the awards for critical thinking about that thing you love.

This vocal questioning of societal norms was endemic for LeakyCon. All discussions I partook in or witnessed across the weekend eventually touched upon gender roles within the patriarchy. Clearly there was a keen need to talk. This slice of HP fandom seems to have created a safe space to not only get creatively involved and build media criticism skills, but also explore important facets of their own personhood. Anybody who finds that chucklesome needs to sort out their priorities. By assembling a crowd of peers, LeakyCon extended that safe space into an irl frantic experience of escapism and acceptance running on fumes and Wrock for a few brief days, and I am not the first person to observe this.

Attendees found it hard to return to the gravity of Privet Drive. There were many tears on the last morning, and even more group hugs. As a grown-ass woman, I have no qualms admitting that I struggled with walking away from the venue like Winky the house elf did from the Quidditch World Cup camp site. As I stood on the stoop dipping a toe back into my email account and work schedule, a group of teens were seeing off what was likely a four day-old friend. “Don’t let the Muggles get you down!” they shouted after the weeping girl lugging an Abercrombie duffel. 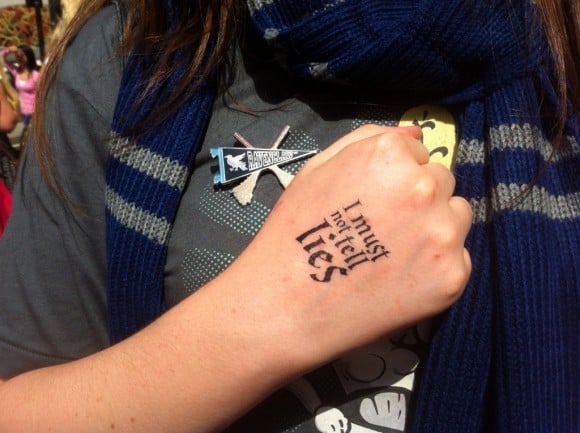 Julia Errens is a London-living “olden days geek girl,” and she blogs at Champagne From Paper Cups.