Did You Know That Dolly Parton Produced Buffy the Vampire Slayer?

The blonde leading the blonde. 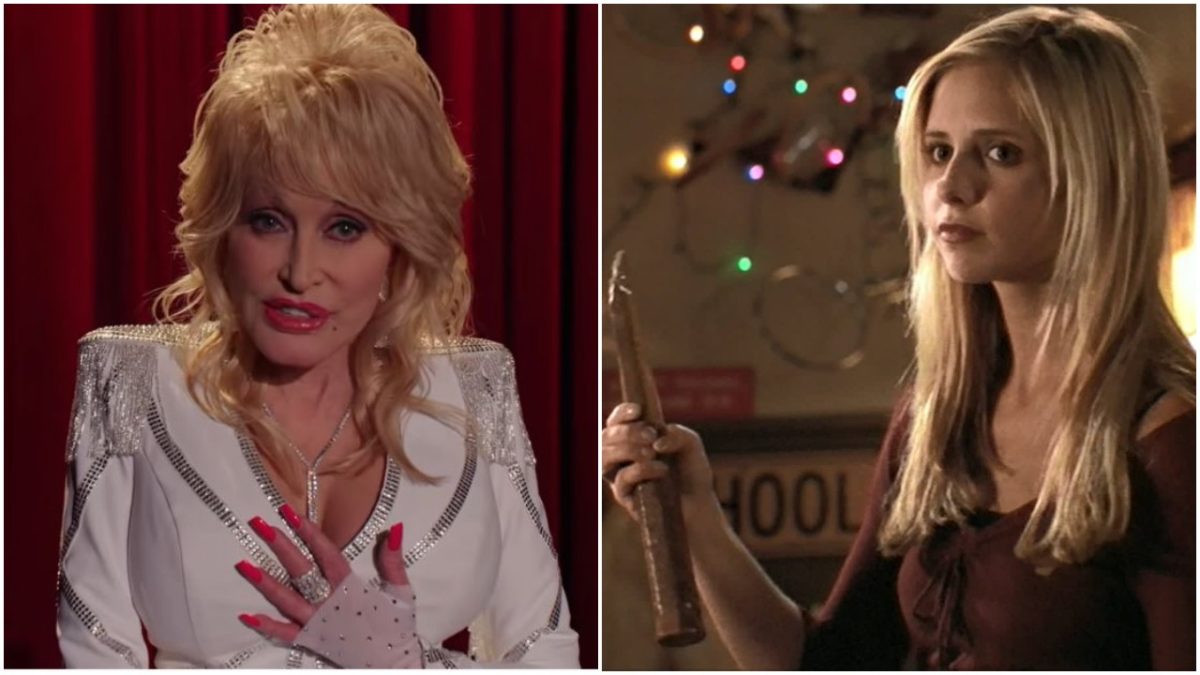 The internet suffered a nerd meltdown this week when one of Hollywood’s weirdest connections resurfaced: American treasure Dolly Parton was a secret producer on the iconic series Buffy the Vampire Slayer. Yep, you read that right. The country music legend herself is behind one of our favorite series of all time.

Buffy was produced by Sandollar Entertainment, which was founded by Parton and her former business partner Sandy Gallin in 1986. The company produced several films, including the remakes of Father of the Bride and Sabrina, as well as Parton vehicles like Straight Talk and the Netflix series Dolly Parton’s Heartstrings.

Sandollar also produced the 1992 film Buffy the Vampire Slayer, which was a critical and commercial flop. But producer Gail Berman thought that the concept could have a second life as a television series, and the rest is nerd history. And while Parton’s name never appears in the credits for Buffy or Angel, you can see the Sandollar logo at the end of every episode.

The only clue who those who didn’t know is a small one: both Buffy Summers and Dolly Parton share the same birthday, January 19th. News of the Hollywood crossover took the internet by storm, reminding us of other unlikely pop culture pairings like Lucille Ball’s relationship with Star Trek.

But unlike Lucy and Star Trek, there is a certain kind of soul connection between Dolly and Buffy. Both are strong blonde women whose power was routinely dismissed because of their appearance. Parton suffered through decades of jokes about her appearance while establishing herself as a musical icon, and Buffy was routinely dismissed for being a vapid teen girl despite her supernatural lineage.

Both women were able to turn these stereotypes and assumptions on their heads, and both women continued to endure despite whatever nonsense life threw at them. They are both pop culture feminist icons in their own special ways. And while Parton has never spoken publicly about Buffy the Vampire Slayer, her moves behind the scenes speak for themselves.

In an interview with the New York Times, Berman tells a story about having lunch with Parton. Upon finding out that the women at Sandollar were making less money than the men, Parton handed a check to Berman and compensated the women fairly.

Many took to social media to praise Parton and Buffy and to marvel at the unlikely pairing:

Dolly Parton (a queen) was an uncredited producer for Buffy the Vampire Slayer (I'm not over Angel, tbh) and just…we don't deserve her. None of us have done enough to be worthy of all this good emanating from one person. https://t.co/wMlqyr5BIA

Wowwww Dolly really does have that slayer energy tho https://t.co/DNPdMobDOl

I love this because I can associate Buffy with Dolly Parton in my mind, not Joss Whedon. https://t.co/ppr7UpyZQO