Website Asks Us to “Do Nothing” for Two Minutes 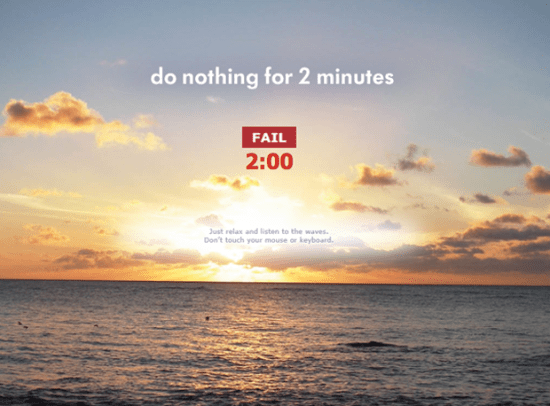 Anyone who has tried to meditate can tell you it’s not as easy as it seems. Especially when we have the Internet, credit card debt, smart phones, and lots of television to watch. But now, the guy behind Million Dollar Homepage, which raised a million dollars by selling one million pixels at $1 each and looks like this, is now asking everyone to view his new Web site and do absolutely nothing for two minutes. Annnnnd … that’s about it. So, why? Besides “because it’s online”?

According to the sites’ creator, Alex Tew,

“I had been thinking how we spend every waking minute of the day with access to an unlimited supply of information, to the point of information overload. i also read somewhere that there is evidence that our brains are being re-wired by the internet, because we get a little dopamine kick every time we check our e-mail or Twitter or Facebook and there’s a new update. So we’re all developing a bit of ADD. which is probably not great in terms of being productive.”

Well, this certainly isn’t news. It certainly also isn’t incorrect. Truth is, it’s not hard to do nothing for two minutes, sitting back and listening to waves while keeping your hands off your computer. But then again, not everyone does yoga. Some people just can’t sit still. There’s an email to check, a text to answer, a site possibly updating … and that’s why we all need to give this a try. Seriously — go try it.

Now you’re two minutes closer to death than you were before. GLGH!

(Do Nothing for 2 Minutes via TechCrunch)