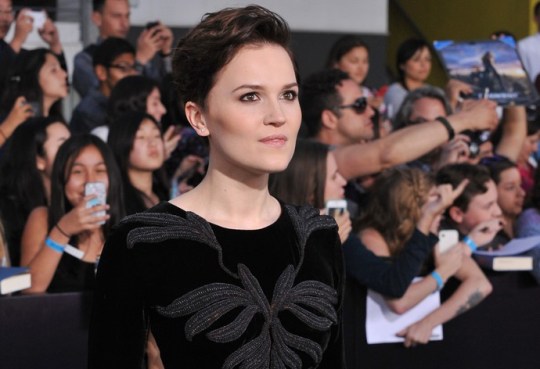 Get hype, Divergent fans—your favorite author is working on a new series.

According to HarperCollins Children’s Books, Veronica Roth is set to write two new novels “in the vein of Star Wars,” about a boy forming an “unlikely alliance” with an enemy. “Both desperate to escape their oppressive lives, they help each other attain what they most desire: for one, redemption, and the other, revenge,” the publisher told the Associated Press.

Personally I would be much more invested in another female protagonist from Roth, because despite evidence to the contrary I derived most of my enjoyment of the book not from the world-building but from Tris’s emotional journey (the whole “I was taught to be selfless but I want to wear eyeliner and punch people and kiss boys, damn it!” thing just spoke to me, okay). But in the email to AP, Roth says that the idea started with this character in particular, and that  “All the other elements — setting, world, even a substantial portion of the plot — came after.” So boy it is, then. I can get down with that.

Plus, if the way Roth’s been writing about her writing is any implication, it’s clear that she’s being very particular and thoughtful with this new series, which can only be a good thing:

“I’ve been really taking my time with it. I’ve written huge sections a certain way only to cut them and start again. I’ve stepped away for a while to work on other things and then come back when I have better perspective. I’ve been more patient with myself and with the story. I’ve expanded my collection of comfortable pants and snack foods. It’s all working quite well so far.”

You had me at “comfortable pants,” Ms. Roth. High-five.

Currently, she says, she has a pretty detailed outline of where she expects the two books to go—both are currently untitled, but one is set to be released in 2017 and the other in 2018. I’m willing to give at least the first one a shot when it’s finally published, how about you?

(via The Hollywood Reporter, image via Jaguar PS)