This Pro-Trump, Anti-Immigration Ad Is a New Low of Disgusting Fearmongering 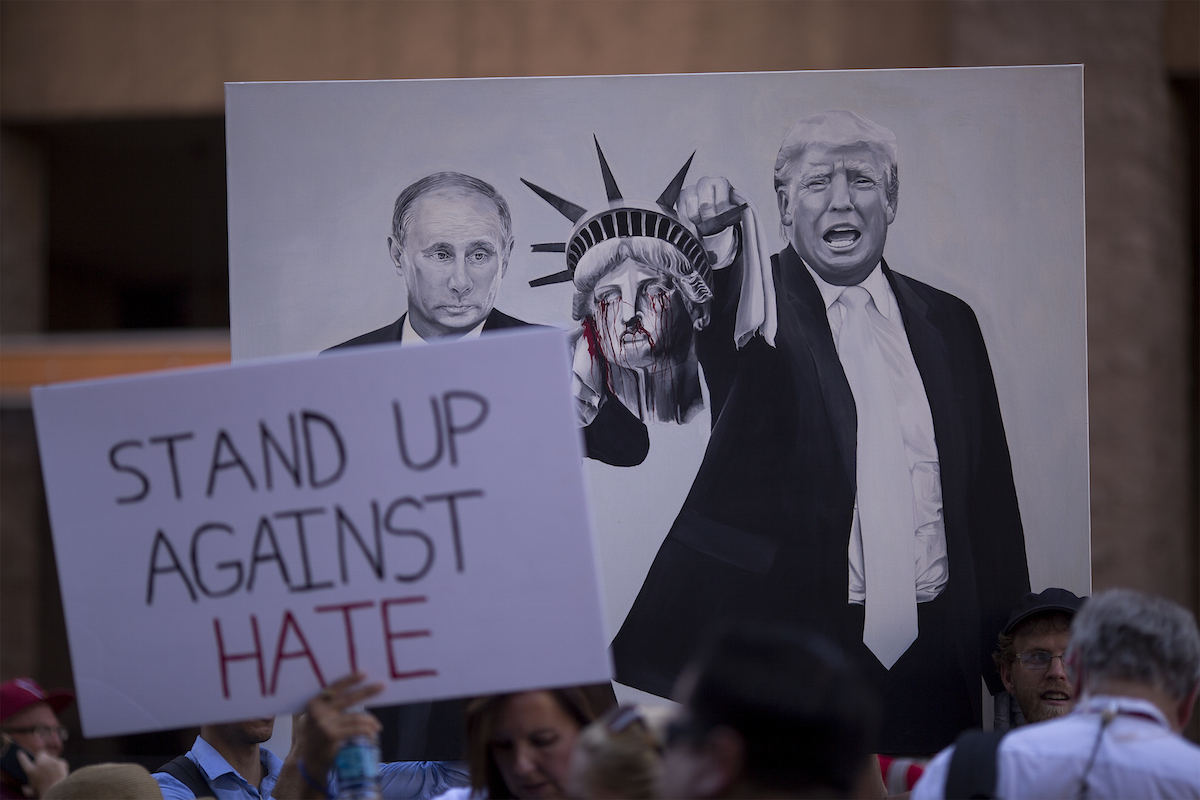 Less than a week before the midterm election, Donald Trump shared a pro-Republican ad on Twitter, even going as far to make it his pinned tweet. The ad is so disgusting I’m not going to embed it here, but it’s easily findable (via the president, no less) if you want to corrupt your brain with it.

It opens with the slogan, “Illegal immigrant, Luis Bracamontes, killed our people!”, and shows footage of Bracamontes, a Mexican citizen who killed two police officers in 2014, laughing during his court hearing and speaking about his lack of remorse. The ad declares that Democrats let him into the country and let him stay, and ends by asking “Who else would Democrats let in?”

The ad is pure fearmongering, and is being rightfully compared to George H.W. Bush’s 1988 Willie Horton ad. That ad centered on Horton, who was serving a life sentence for murder, and who received a weekend furlough pass through a program Bush’s opponent, Michael Dukakis, supported. When out of prison for a weekend, Horton kidnapped a couple, stabbing the man and raping his fiancee. The implication was the same as it is with this new Trump ad: If you vote for Democrats, criminals of color will run rampant, and will likely hurt you or someone you love. It’s not dogwhistling, it’s dog-megaphoning from the rooftops.

At a time when Trump is leaning heavily into the narrative that Democrats are “uncivil” and “violent,” that they are the party driving the wedge of division through the country, the hypocrisy in this ad is so thick it’s hard not to gag on it. The clear message is that Democrats don’t just let, but want criminals in the country. It’s a disgusting, manipulative, fearmongering lie that demonizes both immigrants and the Democratic party.

In 2014, when Bracamontes was arrested, President Obama was working on immigration reform. He was working on two programs: one to offer a legal reprieve to the undocumented parents of U.S. citizens, and also to expand DACA–neither of which would have benefitted Bracamontes or anyone like him. But Republicans pushed the narrative, as they continue to do now, that Democrats want to open the borders to anyone and everyone, the more criminals the better. They conflate DACA recipients with convicted “murderers and rapists,” gang members with legitimate asylum-seekers. And by doing so, they erode the distinction between immigration and “illegal” immigration, turning the very idea of immigration into a dangerous concept.

It’s incredibly telling that the people who push the immigration = crime narrative are often the same people who fight the idea of implementing even basic background checks when we talk about gun control in relation to any incident of mass violence perpetrated by white men. Because ending immigration doesn’t solve crime, it solves the racist concern of having too many people of color around.

Democrats are, largely, pro-immigration. It’s the foundation of our country, after all. Trump is trying to push nationalism as the only form of patriotism, but we don’t have to buy into that. Immigration is a patriotic idea.

That disgusting ad ends with the question “Who else would Democrats let in?” Well, a lot of people.

Or the nearly half of industry founders on the Fortune 500 list who are immigrants or the children of immigrants.

Or any number of the brave, brilliant activists who are risking their safety and freedom to make sure Trump and other Republicans don’t succeed in implementing their racist immigration policies.

I think she’s complicity incarnate, but it seems notable that the First Lady of the United States is herself an immigrant.

If you think that the very idea of immigration is synonymous with crime, then you don’t deserve Rihanna.