Dirty John Is a Complicated Tribute to Female Strength 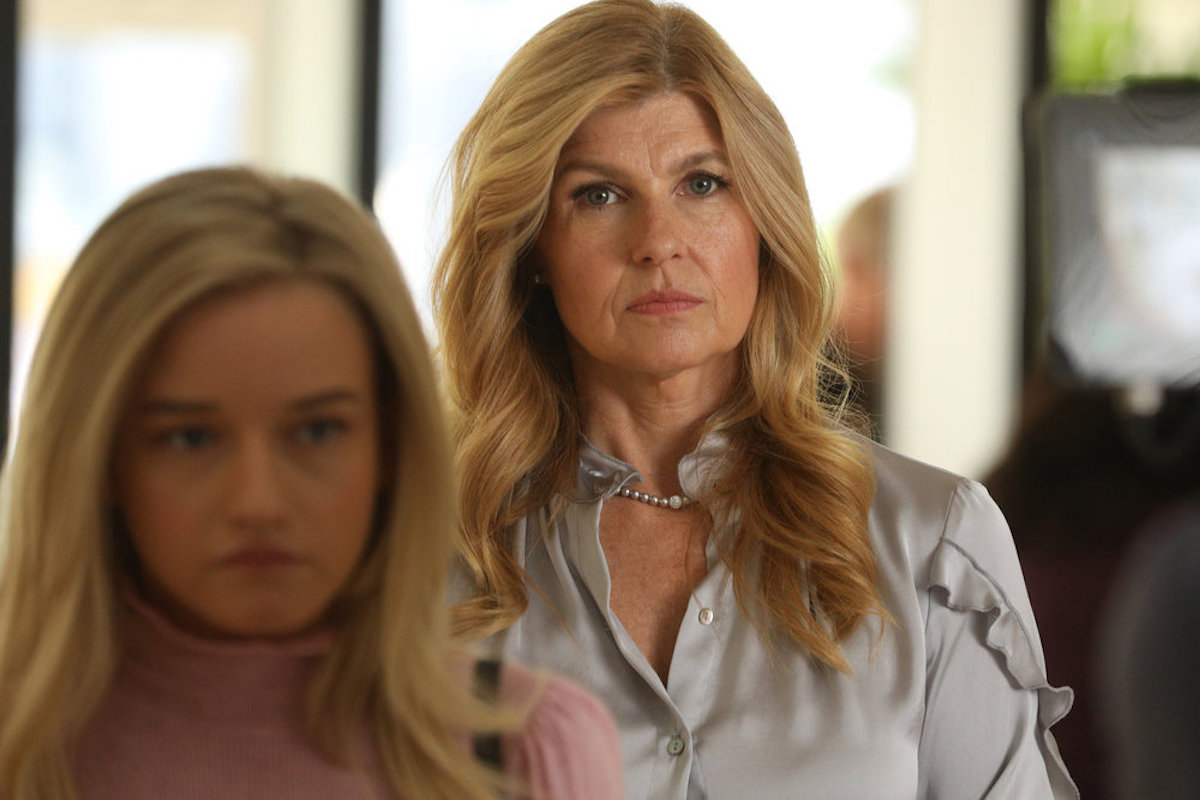 **Spoilers for the finale of Dirty John**

The opening scene of the first episode of Bravo’s Dirty John told us how the show was going to end. The series premiere opened with Connie Britton’s Debra Newell walking through a hospital and talking to police, cut with shots of a violent scene, showing us what appeared to be two figures, at least one a blonde woman whose face we don’t see, a knife, and a lot of blood. We knew from the start that someone would end up dead, but if you hadn’t read the articles or listened to the podcast the show was based on, the revelation of who and how was probably a huge shock.

The show is based on a true story, first recounted by Christopher Goffard in a series of LA Times articles and a wildly successful podcast. It centers on Newell, a woman four times divorced with three adult children, who owns a successful interior design company. Newell meets John Meehan through an online dating site, and only after getting caught up in a whirlwind infatuation and quick marriage does she find out he’s a dangerous, drug-addicted conman.

After spending seven episodes building up to what John might do to Debra and his family, he barely said a single word in the finale. We saw him digging what appeared to be a grave in the desert, we saw him stalking Debra’s daughter Veronica, but he was essentially a background figure in this episode. I had a lot of issues with the structure of the finale–I didn’t get the payoff I was expecting after the show’s buildup of tension. I also didn’t feel the same appreciation for Debra’s younger Terra that I did listening to the podcast. The episode was titled, “This Young Woman Fought Like Hell,” and she certainly did, as it turned out to be her that killed John in self-defense. She fought like hell when he attacked her, protecting herself and managing to stab him through the eye.

But the show still failed to capture just how strong Terra turned out to be.

The LA Times articles and podcast described Terra as the poster image of sweetness. “Her voice, a soft singsong, forced people to lean in. As a kid, the smallest on the team, she was so uncompetitive in softball games that she didn’t bother swinging at pitches.” She was religious and loved country music. She was also obsessed with The Walking Dead.

When we meet Terra in the Bravo adaptation, she and her boyfriend are talking about zombie survival tactics. But for the real Terra, this was a much bigger part of her life and she “[studied] television violence with uncommon intensity.” Amazingly, that’s what saved her life. While she’d never been in a fight or practiced martial arts, she absorbed lessons from television violence. She described the best way to hold a knife. She knew how to improvise for survival. From the LA Times,

In “The Walking Dead,” she absorbed the first axiom of combat with zombies: They will keep trying to kill you until you destroy the head, by blade or screwdriver, machete or gun. She regarded the show as a fount of survival tricks. When a favorite character extricated himself from a bad spot by biting into an attacker’s jugular, she thought, “My teeth are a weapon.”

More than technique, she said, she took a certain mind-set from the show:

“Kill or be killed.”

If you haven’t yet, I highly recommend listening to the podcast or reading Goffard’s series of articles, especially the last installment. They do a much better job than the show of emphasizing just how incredible Terra’s performance in this attack was. The podcast goes into extreme detail describing that attack. Everything is important, from Terra’s rainboots to the layout of her apartment complex parking lot and it all seems to align in a miraculous way that, ignited by the spark of her encyclopedic Walking Dead knowledge, comes to a head in a way no one could have predicted.

While the show didn’t give us that same satisfaction, the way it resigns John to the background of the finale does emphasize an important message of the entire show (and the story on which it’s based): This was never really about John. It was always about the women.

At the end of nearly every episode of Dirty John, especially the early episodes, the audience was left to ask “How the hell are there so many more episodes of this left?” John was outed as a creep and a conman early on. Debra leaves him at the end of episode three. This story structure often felt disconcerting because as an audience, it’s not what we’re used to. We’re used to following John’s arc, for the revelation of his crimes to be the climax. But again, this isn’t really his story. It’s the story of all the ways in which women cope with someone like John.

Obviously, Terra’s extreme physical and mental fortitude was an incredible thing to witness. But the show gives us so many different faces of women’s pain and the very different ways in which they manage to cope with trauma. Every person John has left in his abusive wake has been a woman. His ex-wife (or wives), his daughters, Debra and her daughters–these are the people that have to live as survivors of John’s emotional torture. (The only men we really see him target are lawyers, who get to walk away, and his father, who John definitely kills, and therefore doesn’t have to live with anything.)

Terra’s impulse of fight over flight was such a glorious, visceral surprise. John’s sister Denise got to write John off once and for all, refusing to let Terra feel guilty for “taking him away” from the family he’d already long since driven away himself. These scenes are immensly satisfying to watch. But other women in this show have received heaps of criticism for the ways in which they find themselves coping.

It’s pretty much a universal consensus among viewers that Veronica is not meant to be liked. She’s entitled and judgmental and snobby, but she’s also the first one to see John for what he is. And when she stands up for her mother against a detective trying to shame her for marrying John, we see how that “entitlement” also allows her to demand respect. She also convinces her Uber driver–a stranger–to follow John after she spots him outside her apartment. No one would call her likeable (although her interactions with that driver do turn out pretty cute), but she gets stuff done.

Throughout the run of Dirty John–both the show and the podcast–Twitter has been hurling insults at Debra Newell, calling her weak and stupid, blaming her for everything that happened to her and her daughters. It’s natural to feel frustration watching her make these choices to trust John, especially letting him back into her life after she found out what a monster he was. But, for one thing, there’s only one person who should be blamed for the destruction caused by John Meehan and that’s John Meehan.

Moreover, placing so much blame on Debra also ignores so many other factors, like the level of manipulation possible of a career conman, or the fact that time and again we saw how the legal system is not designed to protect or support women like Debra. As her lawyer tells her at one point, lots of women fall for men like John, and most of them stay around a lot longer and go back far more times than Debra did. She may not have stabbed him in the eye, Walking Dead-style, but Debra showed her own sort of strength in taking the steps she did to leave John, not to mention her decision to share her story to help other women, even as she knew how it would make her look.

The person who has probably received the most criticism, though, is Debra’s mother, for her decision to forgive the man who murdered her daughter, Debra’s sister. I admit, I don’t understand that decision either. But even if we don’t understand it, it seems wrong to write that choice off as weakness. Debra explained her view of her mother to US Weekly.

“My mom is a very forgiving person,” she said. “The one thing that she felt during my sister’s death was that she was the glue because my dad and my brother and I were all very, very upset. She was trying to be strong and keep us all together.”

I can’t attempt to psychoanalyze John Meehan and know why he did what he did or why he targeted women. But it’s likely that at least part of what drove him to focus on women was that they seemed like easy targets. Certainly, as Goffard notes in his article, Terra’s sweetness and her small size must have led to John–who, himself, was weakened from drug abuse–to underestimate her, making her retaliation even more surprising.

But emotionally, too, John spent a lifetime underestimating women. Dirty John never presented those women as victims, though, only survivors finding their own ways to cope. We can judge them for not displaying more power or fury or whatever we think would be appropriate from our outside perspective. The reality of these women’s lives is more complicated and messier. It could sometimes be frustrating to watch. But that’s because, for all the sensational elements of this story, it’s a realistic and empathetic look at abuse, manipulation, and courage.