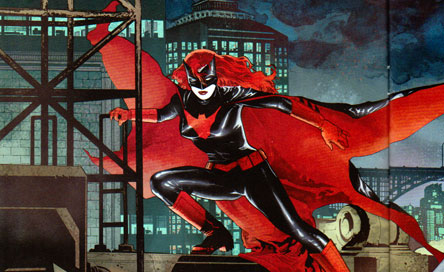 The 21st GLAAD awards were held in last night, seeking as always to “recognize and honor media for their fair, accurate and inclusive representations of the lesbian, gay, bisexual and transgender community and the issues that affect their lives.”  The award for Outstanding Comic Book went to Detective Comics.

Specifically, to Greg Rucka‘s run on Detective Comics featuring Batwoman as the title character and The Question as a short second feature in each issue.  Both storylines had gorgeous art delivered by J.H. Williams III and Cully Hamner.

In their current incarnations, both Batwoman and The Question are lesbian women.  Bleeding Cool Comics briefly summarizes the long, jerky process of putting a gay character into the Bat-family.

Leave your Seduction of the Innocent jokes at the door, please.

Announced in 2006, the revival of Batwoman (a character who was, ironically, introduced in the 50’s in a desperate attempt to get people to stop saying that Batman and Robin were gay) as a prominent gay figure in DC Comics was greeted by “much press coverage… but subsequently DC seemed to clam up repeatedly about the project, embarrassed by the coverage they were receiving and wondering if it were appropriate for a Batbook, one of the major licenses.”

The talented writer (and openly bisexual) Devin Grayson was tapped to write it, and issues were apparently completed, when DC unexpectedly canceled the whole thing.  According to Bleeding Cool, Grayson found out about it from a newspaper.

Batwoman finally made her debut in DC’s year long 52 series, which is also where Renee Montoya assumed the fedora and trench coat of the Question.  Montoya is one of two female characters who were created for the show Batman: The Animated Series, but successfully made the jump to DC comics.  Introduced as a detective in Gotham’s Major Crimes Unit, she was a major character in Gotham Central, a realistic look at the lives of cops in Gotham City with barely a single panel of Batman in any give issue.  It was in Gotham Central that her closeted sexual identity was revealed to readers, and eventually to her peers and family.  The comic dealt with the cold reality of being forcibly outed to unsupportive coworkers and family members with skill and subtlety. 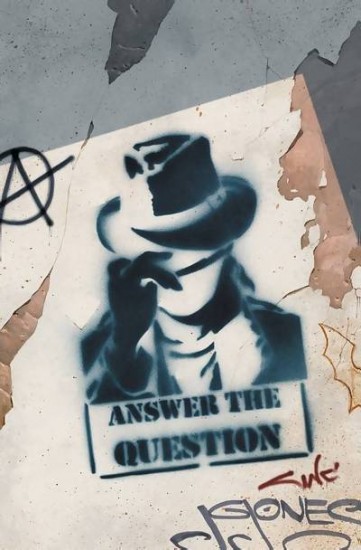 After 52, DC let the characters lay low for a while, until last year when the death (/eyeroll) of Batman opened up opportunities for lower profile characters in the Bat-family to take first billing roles in the titles the Caped Crusader had vacated. Detective Comics became Batwoman: Detective Comics, with a short ongoing story about The Question in the back of every issue.

Bleeding Cool’s article implies that DC has shied away from getting too much media attention for the current Batwoman.  “DC have played a strange game of one part of the business wanting a prominent lesbian character, the other wanting anything but. And the company as a whole has swung between one and the other. This award is a testament to those who succeeded within the company, against many an objection at many a level.”

As a steady Batman reader, I’m also glad Rucka’s Batwoman is getting the attention.  I was unimpressed with her character in 52, her motives for becoming a superhero were unclear and her sexual orientation and past relationship with Renee Montoya seemed like gimmicky addons.  In Detective Comics the character has flourished, dealing not just with some utterly weird and original villains, but also with a girlfriend who leaves her because she’s never around anymore, some serious childhood tragedy, Don’t Ask Don’t Tell, and a completely subverted “inspired to be a superhero by being rescued by Batman” trope.  In other words, Rucka made the character a real person.

Detective Comics became a gem in the chaff of my monthly Batman comics (or, with his death, my Not-Batman comics), and I came to look forward to each issue of what I thought of as “Lesbian Vigilantes Monthly.”  In the most affectionate way possible, I assure you.  Here’s hoping that Batwoman continues to be an example to comic writers everywhere of how to handle gay and queer characters no matter who’s writing her.

The other nominees for Outstanding Comic Book were Buffy the Vampire Slayer, Madame Xanadu, Secret Six, and X-Factor.