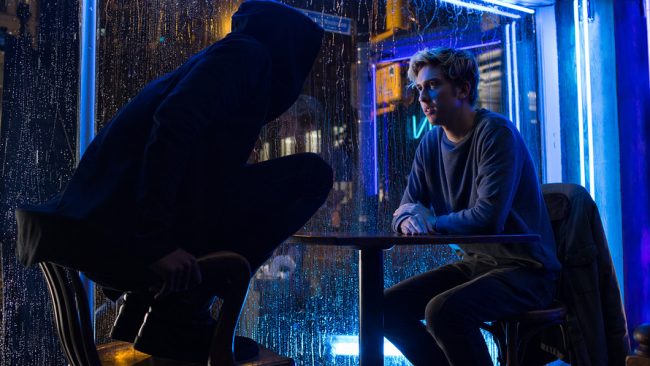 Netflix’s Death Note, an film adaptation of a popular Japanese manga series, is out on the streaming service soon. Adam Wingard’s rendition of the film, transported to a Seattle high school with Nat Wolff as the lead, was the topic of some controversy as it felt less like an inspired and thoughtful change and more like, well, another white-washing of a Japanese story. The first reviews are coming out now for the film, and they suggest that the adaptation isn’t too great.

That’s not to say that every aspect of the film was reviewed horrendously. Many reviewers shared praise for individual performances. Over at IGN, Blaire Marnell was quite a fan of Willem Dafoe’s Ryuk, and David Ehrlich on Indiewire, despite criticism for much of the film, couldn’t help but be drawn to Lakeith Stanfield’s L, whom he describes as “straight out of an anime.”

Though, of course, some found these characters too close to anime-style exaggeration, identifying one of the key challenges in live-action renditions of animated properties. To be honest, while I loved Death Note when it first gained popularity, I realize now that it’s not actually that amazing or groundbreaking of a story, and that even a faithful adaptation would not be that appealing to me now. Still, it’s disappointing to see yet another movie surrounded by this kind of controversy fail, because it demonstrates that Hollywood is still struggling to figure out how to adapt anime.

This ends up being a key theme in many of the reviews, which inevitably compare it to the source material and find it doesn’t measure up. Almost all point out a shallow retelling of the original work, and lament the unfulfilled potential of the film. Anyway, here are a few excerpts of what critics had to say about the Netflix movie. These are all excellent and thoughtful takes that I recommend reading:

“Whitewashing is never a purely aesthetic act; it’s always an indication of a deeper rot. In this case, it pointed toward an inability or unwillingness to meaningfully engage with the source material. The only reason to take such a uniquely Japanese story and transplant it to Seattle is to explore how its thorny moral questions might inspire different answers in an American context, so for this retread to all but reduce America to its whiteness indicates an absence of context more than anything else.

It’s the most glaring symptom of a film that utterly fails to investigate its premise and wastes a handful of goofy performances and a gluttonous degree of hyper-violence in the service of a total dead end. Why go through all the trouble of setting “Death Note” in America if you’re not going to set it in the real one?”

“Director Adam Wingard’s American remake for Netflix is the latest anime adaptation to get mangled (and whitewashed) in translation; the new horror-thriller is cheesy, asinine, convoluted and ludicrous. On the plus side, if your eyeballs need a vigorous workout, this will have them rolling nonstop….By his final scene, he’s reduced to animalistic desperation, growling in anger, the light gone from his eyes. I know how he feels.”

“Death Note is almost a solid B-movie, but considering that wasn’t Wingard or Netflix’s intention, it makes the entire presentation unfortunate. The cat-and-mouse mystery thriller riddled with enticing dialogue that Tsugumi Ohba and Takeshi Obata’s manga was celebrated for doesn’t exist in Wingard’s work. Almost every decision or clue is dumbed down for the audience, but that’s not its worst offense. The characters are nowhere near as intriguing, likable or compelling as Ohba and Obata’s conceptions. Death Note ignores its characters, choosing to put its emphasis on the physical horrors associated with the notebook-that-kills instead of the psychological drama that develops around it.”

I’m still debating over whether or not to watch the film, but will you be checking it out August 25th?