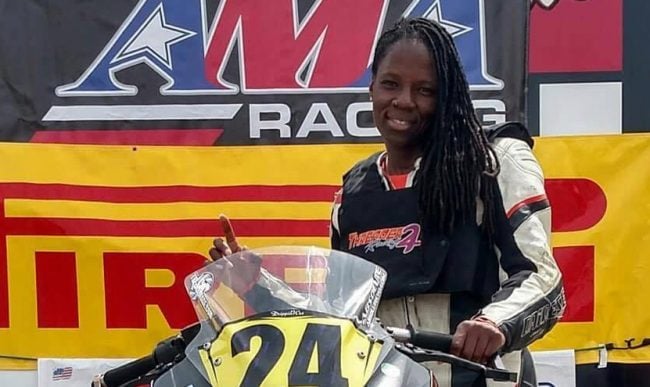 The motorcycle driver in a Deadpool 2 stunt that turned fatal has been identified as Joi “SJ” Harris, thought to be a stuntwoman for Zazie Beetz’s Domino.

Harris was a trailblazer in her field. As People reports, “The Brooklyn, New York native was an advocate for women of color in the road racing game, and promoted herself as ‘the first licensed African American women in U.S. history to actively compete in sanctioned motorcycle road racing events.'” On her blog and social media, Harris regularly used hashtags like #blackgirlsride and #girlpower, lauding her fellow female riders.

Road racing—for those of us like me who had to look it up—is generally defined as racing on a closed circuit that is not shaped like an oval, and has historically encompassed street racing as well.

It’s believed that Harris was performing a stunt for the character of Domino, as “a woman donning the costume for the mutant Domino, whom Beetz plays in the film, was spotted on a black Ducati motorcycle in the area for a sequence days earlier.” Deadline notes that she was not wearing a helmet in the scene because Domino does not wear one in the movie. While this seems like a tragic oversight, it’s hardly uncommon in the world of movie stunts. And it appears that an abundance of caution was taken to prep for the scene:

A source close to the situation said Harris, who was an experienced road racer, had been rehearsing the stunt all day Saturday. A studio production source said that there were “two full days of rehearsals over the weekend, and on Monday, they ran the stunt five-plus times before filming.”

Production has been shut down in the aftermath of Harris’ accident, with no word on when it might resume. Deadpool 2 star Ryan Reynolds issued an emotional statement on Twitter:

Our thoughts and condolences are also with Harris’ family and friends. A true pioneer and an inspiration to others, she thrived in a dangerous and difficult profession, carving out a unique space for herself. In an FAQ on her website, Harris wrote about conquering the anxiety around crashing.

“Not quite scared, but it crosses my mind at times, but a racer can’t let it stop us. Weren’t we all scared of crossing the street before we understood what made us scared? It wasn’t us actually walking across the street, we were more afraid of the possibility of getting hit by a moving vehicle. Once we became confident in our ability to look both ways before crossing a road the fear diminished. THAT’S IT … you have to analyze WHY YOU ARE AFRAID, then the fear is lessened … Everything takes time,” Harris wrote. “Face your fears.”