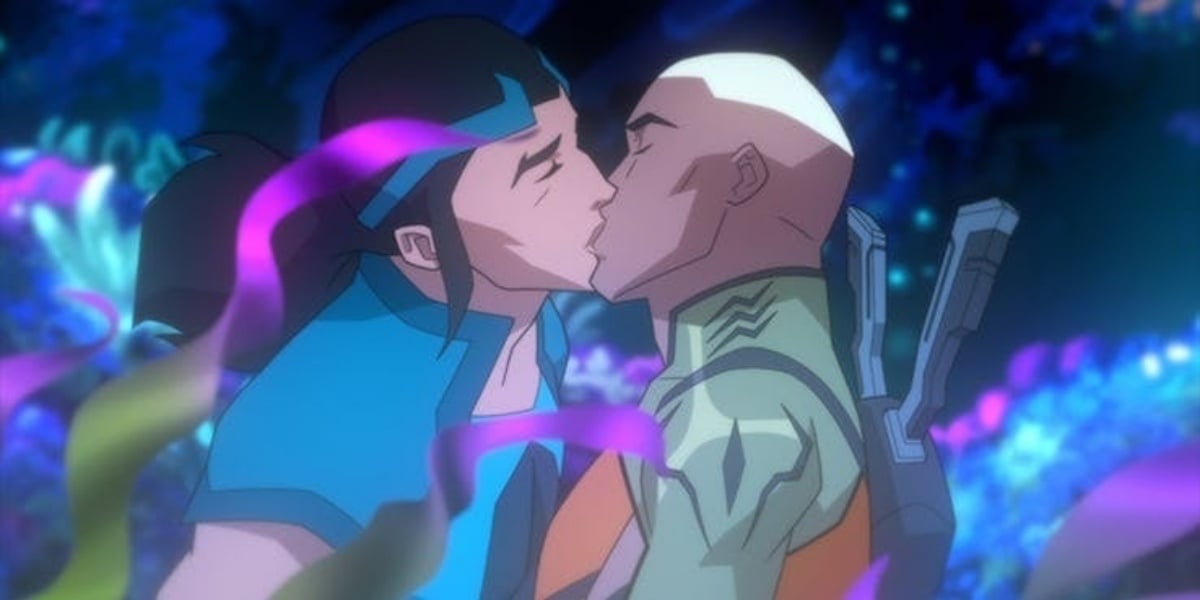 Young Justice has been a beloved series for years. Originally airing on Cartoon Network for two seasons from 2010 to 2013, it was cancelled due to low toy sales and Mattel pulling funding, because, you know, if the boys don’t buy the toys, no one wins. Thankfully, after a strong fan campaign and high viewership ratings on Netflix, the series was officially renewed for a third season by Warner Bros. in November 2016.

It was split into two separate sections/arcs, each consisting of thirteen episodes, and that became Young Justice: Outsiders, which is streaming its final episode right now. In an interview with Teen Vogue, executive producers Greg Weisman and Brandon Vietti talked about a lot of things from season three, including the increased queerness of the series.

The show airs on DC Universe, and because of that, Weisman and Vietti were able to “skew more adult to keep up with the characters as they age,” and also do things Cartoon Network, in those days, wouldn’t allow them to do—namely, have a queer lead. On the show, we have the gender-fluid character of Halo, a gifted individual created as a result of the fusion of a Quraci girl and the spirit of a Motherbox. Halo then chooses the name Violet Harper for themselves.

In the interview, they explain that while “mother box” implies femininity that isn’t exactly true in Halo’s case:

“A Mother Box sounds, like well obviously, must be female, because there are Father Boxes and Mother Boxes, but both those things are loose English translations of alien words for a living computer,” Weisman explains. “And so from Halo’s point of view, she isn’t sure that she’s either a girl or a boy, though clearly, she’s in a cis-gendered female body. And so that also becomes questions she’s asking herself, decisions she has yet to make, and that includes who and what she’s attracted to sexually as well.”

Harper’s human form is that of a Muslim, hijabed woman, and so the character goes through a lot of self-exploration to try to understand who they are now, especially with all these conflicted identities. Vietti says, “I would call her the perfect sci-fi teenager. To have this incredibly unique character in Violet, this spirit that wakes up in a dead body now has to deal with hormones and issues of romance and religion and gender. We were really excited to work with a character like that and see how she fits into our world. These are all such important sort of coming of age issues that everybody—everybody—deals with.”

It was big news on the interwebs when the scene came out showing Aquaman II, Kaldur, kissing his boyfriend, Wyynde. For Weisman and the other writers, this was just solidifying how they’d viewed the character from day one.

“It was never our intention for him to be exclusively gay. We planned once we got our third season and we were on DC Universe streaming instead of Cartoon Network and had frankly more freedom and more flexibility to write the character the way we wanted to. We planned to illustrate the fact that he was bisexual. So we’re not taking away the feelings he had for Tula in season one and two, but that doesn’t change the fact that now it’s been years since Tula passed away. And in that interim time, he and Wyynde got together. It was great to be able to show that, and I’ll admit, I think we both felt we wanted to sort of surprise the audience with it. So we could have said from day one of season three, “Oh yeah, he’s bi. You’ll see it later.” But we wanted the surprise factor. People seemed very pleased by that episode and the kiss went over pretty well.”

It went over swimmingly, and it’s great to see that, once they were given the reins to create these nuanced queer characters, they took the opportunity. I especially love that they wanted to respect both sides of his bisexuality. That representation was one of the many reasons I was happy to return to Young Justice.