Huntress Somewhat Unbenched in the DCnU, Will Receive Her Own Mini-Series

One of the big stresses to the fandom when a company decides to reboot continuity is the worry that some of their favorite characters will be benched, left behind, or forgotten, and the DCnU reboot has not been immune. In particular a lot of fans are wondering about the place of some of the great female characters of the DCU who have small but very, very devoted followings, but fans of The Huntress can relax, as today DC has revealed that she is getting her own five-issue miniseries starting in October with The Huntress #1, and will be hanging around with the Birds of Prey just like old times.

The creative team on the miniseries is Paul Levitz, one of the co-creators of The Huntress, back when she was the Pre-Crisis Earth-2 daughter of Bruce Wayne and Selina Kyle who turned to vigilanteism after avenging her mother who was blackmailed into returning to her Catwoman identity and then killed in combat. Current Huntress shares very little of that backstory, so it’ll be interesting to see what he does with her. According to Newsarama:

This 2011 revamp Huntress apparently has Italian roots, as DC reports she heads “home” to Italy to embark on a life-defining mission in this series, suggesting the DCnU version of the Huntress will likely remain Helena Bertinelli. It appears she will also continue to have ties with the Birds of Prey in the upcoming months.

Along with the plot, we also got a look at the character’s post-reboot costume. Huntress has gone through some questionable costume changes over the years, so the question of what artists could choose to draw from has a lot of answers. 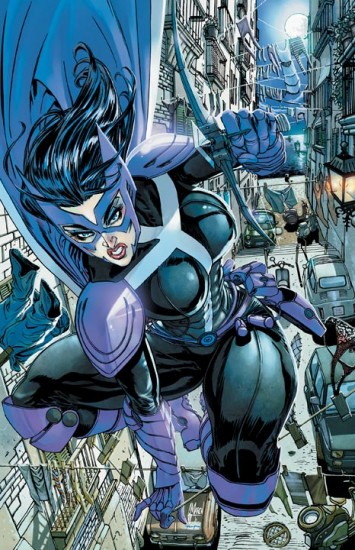 As it stands, it looks like they’re actually going with the most recent version of her costume, seen sparingly in The Question second feature on Detective Comics, almost exactly. Her stylized white cross is significantly slimmer, and her cape is back, but otherwise the full coverage body armor is on refreshingly full display. No inexplicable belly window and short shorts for this vigilante. Lets hope that DC will eventually give us the good news about some of their other MIA characters, Power Girl, Stephanie Brown, and Renee Montoya for preference.