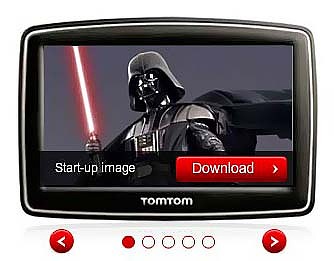 I don’t have a TomTom device.  I don’t even have a car.  But this is technological geek synchrony at its best:

For the next few months, those of you who do have these magical GPS devices will be able to have Darth Vader, C3PO, Yoda, and Han Solo order you to “turn left” or “proceed ahead at the light”.

One step closer to something I’ve always wanted: For the subway stop announcements to be voiced by the greats of science fiction.  Imagine if Patrick Stewart were to announce “The next stop is Essex St.  Engage.”  Commuting would be so FUN!

Demo video after the jump:

You can also check out samples of what your Star Wars-themed directions could sound like here.