How Okoye’s Feeling About Bucky and the Avengers in Infinity War: “She Hasn’t Been Excited About Outsiders” 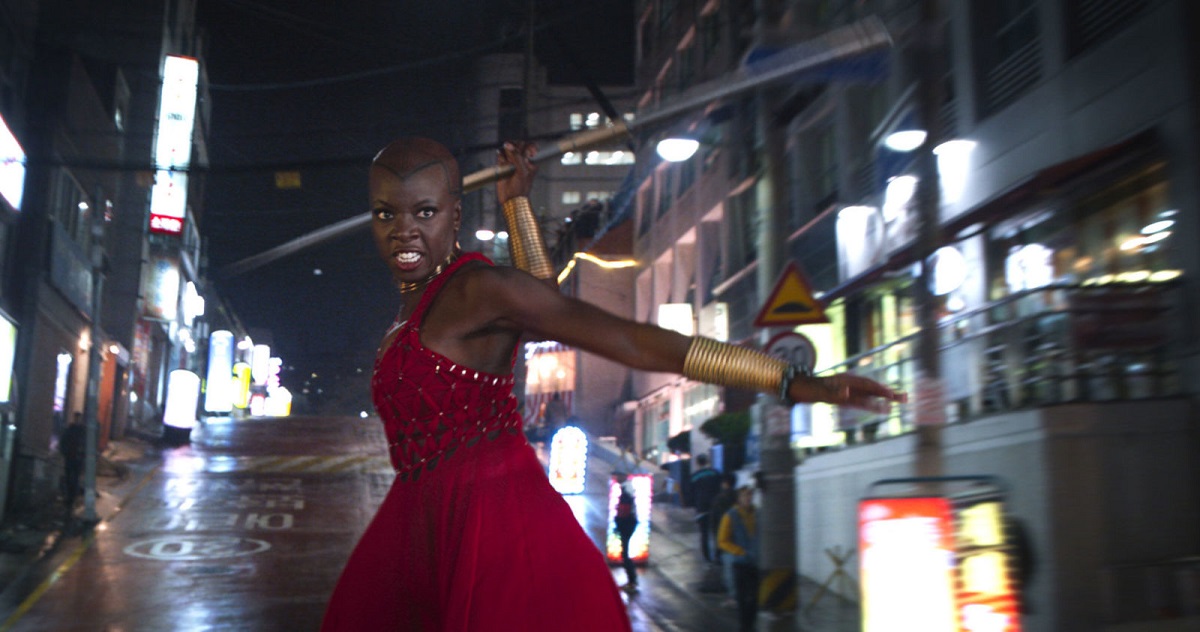 Black Girl Nerds and a number of other outlets were able to chat with Black Panther star Danai Gurira about her role as Okoye in both Black Panther and Avengers: Infinity War. The interviews were conducted before Black Panther came out in theaters, but Gurira had some very interesting things to say about Okoye’s journey in Infinity War. Not only will this traditionalist have to deal with a whole new world of outsiders, but she’ll also make some new connections and face Wakanda’s biggest threat ever.

“My character is the General,” Gurira said of Okoye’s motivations. “… She’s a deep traditionalist, and you know, Wakanda is a very traditional place. It has been really protected through traits and traditions and rituals and structures that were created by the forefathers like a thousand years ago. So she holds it on her shoulders. She’s in charge of the intel of the nation; she’s in charge of the military. So for her, it’s something that really weighs on her shoulders, to make sure that this nation is maintained … She has a lot of responsibility and she takes it very seriously.”

And that responsibility is going to feel a whole lot more looming as Wakanda reveals itself to the world for the very first time. “She’s excited for [T’Challa], but she also holds responsibility that the throne must be maintained through her structures,” Gurira said. “The changes that they go through, to the point that they are opening up their borders and they are letting people know who they are—it’s something that she really has to journey through. There are other characters who are more ready to do it. She’s not ready at the beginning.”

Of course, it all comes to a head for Okoye when the other superheroes arrive in Wakanda. “She’s more cautious about [the Avengers showing up],” Gurira said. “You know what I mean? She’s always thinking about how many things can go wrong and how much she can control what could go wrong before it goes wrong. But there’s not a lot of control that she can have over something that’s this massive. But that’s where her caution is. That’s where her concerns lie.”

That isn’t going to stop her from doing what she does best, though: defending Wakanda. “This is one of the biggest threats they’ve dealt with … The fight’s coming to them, right? … She is led by her King and his move; being a General, you have a Commander-in-Chief, and you go by his decisions. She definitely lets him know her thoughts, but she goes by his decisions. You’ll have seen this in Black Panther.”

She also teased some new connections for Okoye once these outsiders arrive—though she wouldn’t share any details. “I’m excited about the connections that she can and might make through what she’s about to go through, with these warriors and these Avengers and these superheroes. But I cannot share with you who she has a connection with.”

Of course, these aren’t the first outsiders to stay in Wakanda. As we saw in one of the Black Panther post-credits scene, Wakanda has already taken in Bucky Barnes, a.k.a the Winter Soldier, and given him a new arm. So how does Okoye feel about that?

“She hasn’t been excited about outsiders,” said Gurira. “You’ll see more of that. You’ll see that in a very clear way in the movie. Outsiders, they threaten what they’ve tried to build up. But that’s a big question. Do we isolate? Or do we open up? … It’s highly relevant to what we are dealing with in various parts of the Western world, but it’s from an African perspective, so it’s really interesting.”

With Bucky, of course, it helped for Okoye’s peace of mind that he was the only one. “He’s one guy,” she continued. “He’s one guy, you know. He’s manageable. And she’s thought it through. She knows how to disarm that arm.”