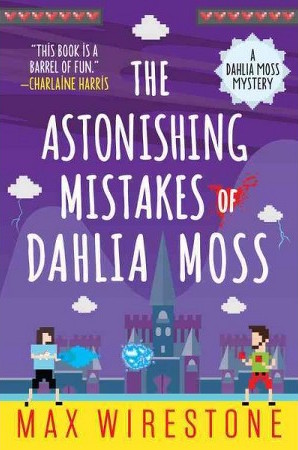 Dahlia Moss is back for another mystery in The Astonishing Mistakes of Dahlia Moss, out today from Orbit books!

Max Wirestone’s Dahlia Moss series is described as, “Veronica Mars meets the World of Warcraft,” so you can see why we’re a bit excited about the second book’s release today, following October’s The Unfortunate Decisions of Dahlia Moss. We think you might like it, too, so we’ve got an exclusive excerpt from the new book to share with you today!

You’d think that after I took a bullet in my arm following my last case that I’d be timid about going in guns blazing a second time. But you’d be wrong. I faced down death, and the only bad thing that happened was that I got a cool scar. Which is a like a tattoo, but with street cred.

I may have been a little overconfident this time. And that may have seriously clouded my judgment. Some small, but confidently made, mistakes include:

That’s the thing about a sense of invulnerability—you usually get it right before things go terribly, terribly, wrong.”

Max is a graduate from the Alabama School of Mathematics and Science and has degrees in English and German from Washington University in St. Louis. Max spent his twenties as a librarian-nomad, crossing the United States, and shelving (and reading) a lot of books along the way.

After moving to New England, Max became the director of a small-town library, where he could unite his love of books, mysteries, and geekery. Since then, he’s taught a lot of small children how to dust for fingerprints, helped teens and tweens build competitive Lego Mindstorm robots, and became his town’s definitive source on how to correctly pronounce character names in Game of Thrones.

Max cleverly married an editor, and the two have a 5-year-old son. They recently relocated to a thriving college town in the Midwest and welcomed an exceptionally needy dog into the family.

Currently, Max is busy working on Dahlia Moss’s next adventure. That, or he’s just playing The Legend of Zelda: Breath of the Wild.